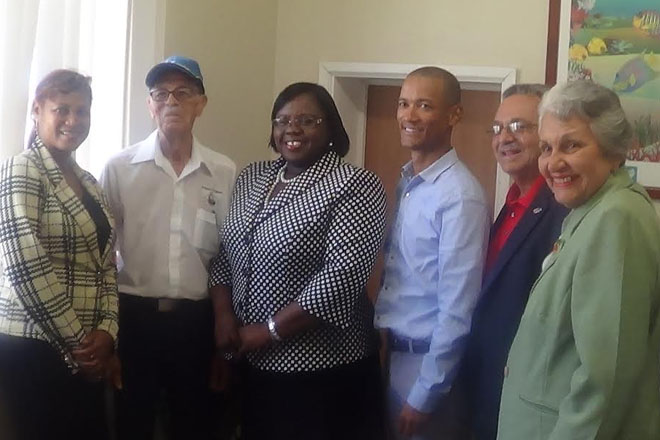 Sports Page — Two top officials from the world’s governing athletic body IWAF visited Nevis on Tuesday 31st March and met with top government officials on the island. Mr. Victor Lopez and his wife Evelyn first paid a courtesy call on the Junior Minister of sports, Hon Hazel Brandy-Williams and then met with Premier Vance Amory at his office.

The two officials held lengthy and cordial discussions with Minister Brandy –Williams as they spoke about the benefits of pursuing careers in Athletics for young persons on the island.

Based on a request from Minister Williams, Mr. Lopez promised to raise the issue of the possibility of assistance from the world’s governing body in constructing an all weather track on the island.

Minister Brandy-Williams welcomed them back to Nevis and promised them that their first experience at the Inter Primary sports meet on Wednesday 1st April will be a thrilling experience.

Also present at the meeting were local and overseas representatives of Gulf Insurance, the company which has been the main sponsor of the prestigious event over the last twenty years.

Victor Lopez was elected president of the North American Central American and Caribbean Athletics Association (NACAC), one of the six IAAF area associations, in 2013.

The position of President fell vacant following the death of Jamaica’s Neville “Teddy” McCook, who passed away on 11 February 2013 and who had been NACAC President from 2007 and an IAAF Council Member as Area Representative from 1999.

Lopez will serve out McCook’s remaining 2013-2015 term on the IAAF Council. The next IAAF electoral Congress taking place in Beijing, China, at the time of the 15th edition of IAAF World Championships in 2015.

His wife Evelyn Claudio Lopez has also been actively involved in athletics and has produced a book ‘Living history of women’s athletics.’