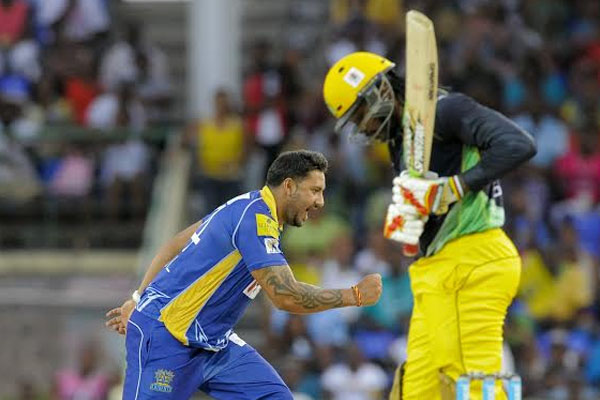 ESPNcricinfo staffs report that on a dramatic final day of the CPL 2014 regular season, the Tridents catapulted from fourth place into first to earn a bye through to the tournament final based on having the best net run rate after finishing deadlocked at 6-3 with the Tallawahs, Trinidad & Tobago Red Steel and Guyana Amazon Warriors.

A loss for the Tridents would have left them in fourth place at 5-4, leaving them needing two wins to reach the final. That fate has now been transferred to the Tallawahs, who could have clinched first place outright with a win. Instead, the nosedive they took on net run rate in a losing effort means they will have to beat the Red Steel in the first CPL play-off match on Wednesday followed by another win 24 hours later against the Amazon Warriors in order to reach Saturday’s final.

Pollard’s decision to bat first after winning the toss was met with a good amount of criticism from the game’s television commentators, particularly because teams batting first had managed to win just seven of 26 games on the season heading into the match. The choice was vindicated in emphatic fashion as the Tridents recorded the CPL’s largest margin of victory by runs with the captain leading the charge.

Dwayne Smith got the Tridents off to a solid start, bashing 32 of the game’s first 35 runs before falling in the sixth over to Daniel Vettori thanks to a tremendous catch from Andre Russell, who covered 30 yards running across from long-off to take a skied chance at long-on. Shoaib Malik and Raymon Reifer fell cheaply a few overs later and when William Perkins was caught behind off Rusty Theron in the 14th over for 36, the match was evenly balanced at 98 for 4.

Pollard and Jeevan Mendis then produced a 57-run stand for the fifth wicket, with 38 of the runs coming off Pollard’s bat as the captain put his stamp on the game. The Tallawahs seemed to have the Tridents held in check at the 16-over mark with the score 124 for 4, but Pollard erupted for a four and two sixes off Russell in the 17th as part of a 20-run over and brought up his half-century off 28 balls in the process.

Mendis was run out for 17 to end the 18th over before Rusty Theron nailed the stumps to remove Pollard and Kyle Mayers off consecutive deliveries to end the 19th to make it 161 for 7. Jason Holder cracked two sixes in the final over before falling to Russell for 12 as the Tridents ended on 175 for 8. Theron ended up with figures of 4 for 35.

Considering that the Guyana Amazon Warriors chased 189 earlier in the day with relative ease on the same pitch in the small confines of Warner Park, doubts still lingered as to the wisdom of Pollard’s decision at the toss. The Tridents bowling unit turned in a sterling performance to ensure Pollard’s efforts with the bat did not go to waste.

Ravi Rampaul struck a major blow in the second over of the chase, striking Chris Gayle low on the pads with a full inswinger to remove the Tallawahs captain leg before for 1. His opening partner Chadwick Walton joined him in the dugout one over later for 5 when the keeper Perkins pulled off an extraordinary one-handed diving catch down the leg side.

The Tridents focused effort in the field continued with the run-out of Adam Voges for 10 in the eighth over before Owais Shah missed a sweep to the legspin of Mendis and was struck in front of the stumps for the second lbw dismissal of the innings to make it 54 for 4. Russell was the only player left with the kind of muscle needed to get the Tallawahs back into the game but a brilliant diving catch by Mayers running in from long-on removed Russell for 4 and sparked euphoric cries in the field.

Nkrumah Bonner scored 47 at number three, but he and Voges were the only two to reach double figures for the Tallawahs as the tail was wiped out in quick time. Theron was caught on the boundary off Ashley Nurse for 3 to end the game as the Tallawahs were bowled out for 87 in 15.3 overs, the lowest total by any team in this year’s CPL. The Tridents now have five days to bask in the glow of Sunday’s win while the Tallawahs have 72 hours to dust themselves off and regroup for Wednesday’s play-off encounter with the Red Steel.