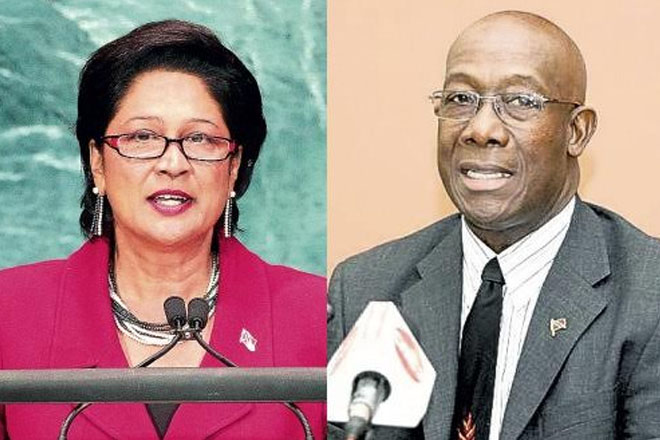 Port of Spain, Trinidad — Prime Minister Kamla Persad-Bissessar on Monday challenged opposition leader Keith Rowley to debate her one-on-one on July 30 as originally agreed. She said Trinidad and Tobago faces a crucial choice at the general elections on September 7 and the voters deserve to be fully informed.

“They deserve to hear a debate between the two contenders to be prime minister,” she said, “And we need to have it as soon as possible so that people have time to make up their minds.”

Persad-Bissessar explained that earlier this year she gave her word that she would take part in a debate.

“The TT Debates Commission offered a date of 30th July and a format that I was happy to accept,” she noted.

She stated that she cleared her diary to keep that date and was looking forward to participating and making her case.

“I was deeply disappointed when later the TT Debates Commission said they are not able to put on such a debate despite their previous commitment,” she told supporters. “I still want that debate to take place. I am willing and keen to take part on 30th July and I say to my opponent Keith Rowley… Are you ready? Will you debate me? Let’s do this. Come on let’s do this.

“Let’s organise this between ourselves and give the people of Trinidad and Tobago the debate they deserve. Come on let’s make this happen.”

Persad-Bissessar also called Rowley a liar on Monday night and gave several examples to prove it.

She made reference to a speech by the opposition leader in which Rowley claimed that she took five day weekends and that the Speaker had obstructed parliamentary questions on this issue.

She said parliamentary records show this is another Rowley lie.

“If he’d bothered to turn up in Parliament in November 2013 he’d know his question was answered. And the answer confirmed how hard I work and that I had chaired 94 percent of cabinet meetings,” she said.

Persad-Bissessar asked: “Is there no depth to which the opposition leader will stoop? How desperate is he to make up these ridiculous distortions?”

She then proceeded to outline some of the instances where Rowley lied, including taking fake emails to parliament in an attempt to bring down current government, about his ownership of an apartment, and waving a pizza delivery slip in parliament as evidence of the prime minister receiving files.

Persad-Bissessar said her People’s Partneship government is proud of its record of delivery across the country, noting that her administration delivered on 90 percent of its manifesto promises, stabilised a declining economy and brought unemployment to a record three percent.

“I have a mission. My government is working to continue to build a new and better Trinidad and Tobago. We have a clear plan is to deliver security, prosperity and a better future for everyone,” she said.