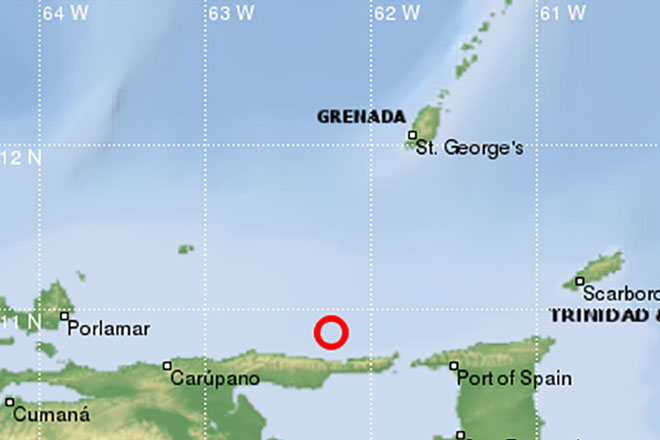 Port-of-Spain, Trinidad, CMC — Trinidad and Tobago was jolted by an earthquake with a magnitude of 4.8 on Monday, the second tremor to affect the oil-rich twin island Republic within six days.

The Seismic Unit of the University of the West Indies (UWI) said that the quake, which was felt at 3.11 am, had a depth of 10 kilometers and was located 85 kilometers west, north west of the capital and was also felt in neighbouring Venezuela.

It was located 10.87 degrees north, 62.25 degrees west. There were no immediate reports of damages or injuries.

Last Wednesday an earthquake with a magnitude of 5.4 rocked the island and was also felt in Venezuela and as far north as St George’s in Grenada. It was focused at an epicentre around 34 kilometres north-northeast of Irapa in Venezuela and about 105 kilometres west-northwest of Port of Spain in Trinidad.

The quake, which struck at around 10:24 local time, was felt across Trinidad and Tobago, with light to moderate shaking the norm. Many people took to social networks to report on the tremor, but disaster officials here said there were no immediate reports of damages to infrastructure or injuries.

UWI officials have in the past warned the country to be prepared for a much stronger earthquake.