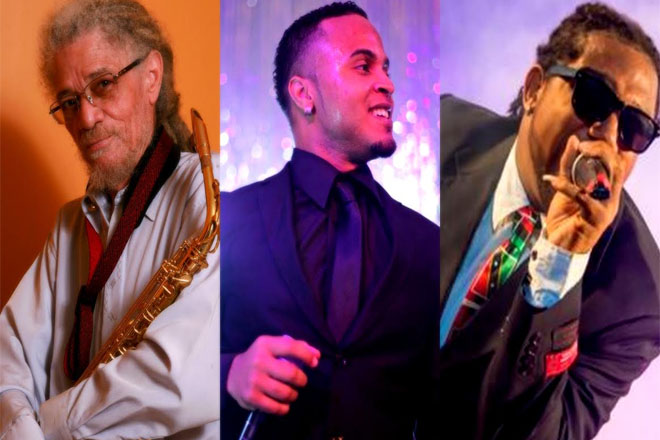 Legendary Trinidad Brass Band the Roy Cape All Stars are one of the marquis performers at this years 19th St.Kitts Music Festival. The band will be featuring several regional soca acts including the Soca Monarchs of Antigua and St.Kitts.

The Amtiguan Soca Monarch Ricardo Drue and St.Kitts Soca Monarck ‘Mr Bagnall” will be among several big name soca acts who will be featured by the legendary Trini Brass band. Other acts to be featured will include Blaxx, Patrice Roberts and the phenomenal Benjai.

The leader/musical director of the Roy Cape All Stars, Mr. Roy Cape has done it all in music: an accomplished saxophonist; arranger; composer and recording artiste, and he’s also the 2004 recipient of a Humming Bird (Gold) national award, “for loyal and devoted service to the nation” and, in 2011, an honorary doctorate from UWI was conferred on him.

Over the past three decades, the All Stars, under the Cape’s direction, has earned the reputation of being the most sought after brass band in recording studios, calypso shows, and major concerts, not just in Trinidad & Tobago, but throughout the Caribbean, The United States of America, Canada and Europe.

The band is greatly in demand due to its high levels of professionalism and consistent excellence, making them not only the premier music band in Trinidad and Tobago but also the number one calypso band in the world.

The All Stars have long been ambassadors for the Caribbean, representing the region at a number of International music festivals and official missions.

Cape’s All Stars appearance this year at the annual St.Kitts Music Festival will be their 3rd having performed at the very first festival back in 1996 and then again in 2002.

It will also be the first time that the band will feature a St.Kitts artiste . According to Cape he is looking forward to the performance and has indicated that a special surprise is in store for the St.Kitts-Nevis Audience at this years fest.