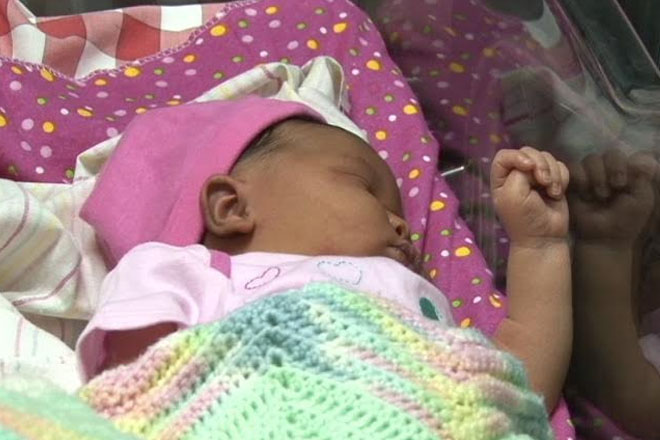 Indee was born on September 19th, the day that the Nation celebrated its 32nd anniversary of Independence.

She weighed a whopping 9lbs 10ounces.

At just two days old, Indee received a very special visit from Prime Minister, the Honourable Dr. Timothy Harris who was accompanied by the Honourable Wendy Phipps, Minister of State within the Ministry of Health, Community Development, Gender Affairs and Social Services.

The Prime Minister, after extending well wishes to the baby and her parents, said the government is thinking about making recognising Independence births a memorable occasion.

“This is a token of appreciation we have brought. Senator Phipps will bring to Cabinet some proposals which we will consider in a way in which we could celebrate and commemorate what, for us, will be a historic occasion in terms of the delivery on the 19th of September,” he said.

Meanwhile, Senator Phipps, on behalf of the government, wished the parents success in raising Indee.

“We’re confident that at least half the battle is won, exceptional parenting, where you can trust in God so we trust that as she grows up in this country, that she herself will be her own ambassador for St. Kitts and Nevis to show the potential that resides in each and every one of our young people,” she said.

Trinity ‘Indee’ Esdaille-Robinson is the third of her parents’ children.