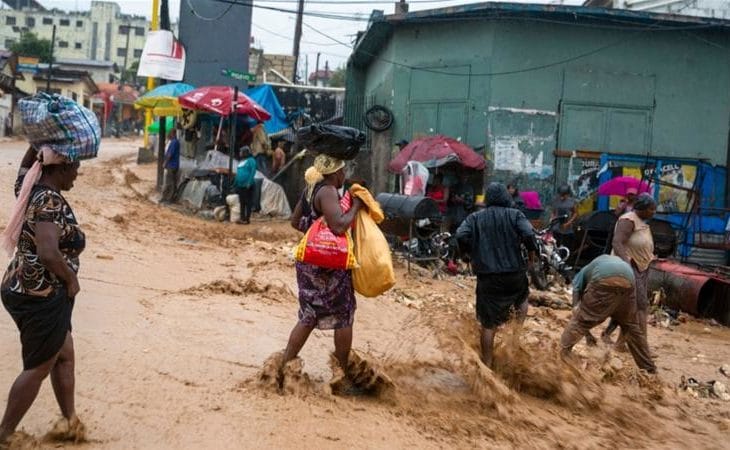 Lodge Hill, Barbados, August 24 2020 (Barbados Today):  SOURCE- CMC  Haitian authorities on Monday confirmed that nine people had died as Tropical Storm Laura moved away from the French-speaking Caribbean Community (CARICOM) country with residents in Jamaica and Cuba bracing themselves for up to 12 inches of rain.

The Miami-based National Hurricane Center (NHC), in its latest bulletin, said that swells generated by Laura are affecting portions of Hispaniola, eastern Cuba, the southeastern Bahamas and the Turks and Caicos Islands.

It said that Laura is expected to produce rainfall accumulations in Jamaica and Cuba of between four to eight inches with maximum amounts of 12 inches, while the Cayman Islands will receive maximum amounts of up to six inches up until Tuesday.

The authorities in Haiti said that the storm, which pounded the country over the last weekend, killed five people in the capital and four in the South-East department, while two others are missing.

“I share the sorrow of the families whose loved ones were killed on August 23 during the passage through the country of tropical storm Laura. I urge the population to respect the instructions of the authorities,” President Jovenel Moïse said.

Prime Minister Joseph Jouthe, who is also the President of the National Committee for Risk and Disaster Management, expressed condolences to the family of a 10-year-old girl in the locality of Cachiman.

According to the provisional report from the Office for the Coordination of Humanitarian Affairs (OCHA) in collaboration with humanitarian partners on the ground, initial information shows that the storm has caused flooding in four departments.

Numerous rivers were also flooded across the country.

The authorities said that they had also evacuated several communities in the Centre and Artibonite departments along the banks of the Artibonite River.

They said telecommunication services were temporarily interrupted on Sunday and that several hospitals were short-staffed due to the inaccessibility of roads, and the health centre in Anse-à-Pitre was reportedly flooded.

“Bad weather makes it more difficult to quickly restore the network and electrical circuits. As a result, several areas are at risk of being without electricity for a few days,” the electricity company, Électricité d’Haiti (EDH), said in a statement.