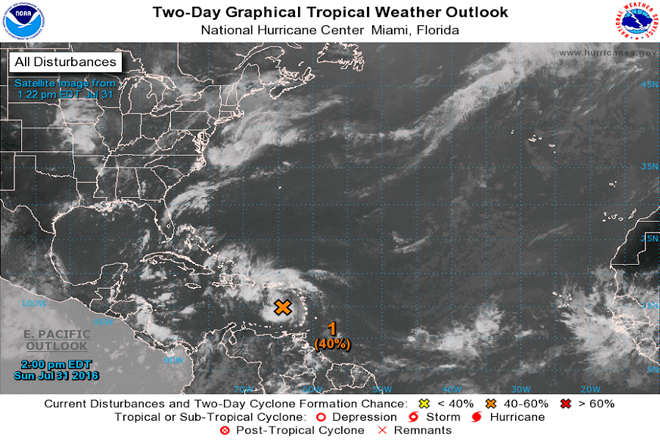 (ZIZ News) — The weather system that has been affecting St. Kitts and Nevis is passing to the south of the Federation.

According to a report from the National Hurricane Centre showers and thunderstorms associated with a strong and fast-moving tropical wave over the Eastern Caribbean Sea have changed little in organization and there are still no signs of a closed surface circulation.

The report says although some gradual development of this system is possible during the next day or so, the chance for tropical cyclone formation should increase after the wave reaches the western Caribbean Sea in a couple of days.

This disturbance is expected to cause locally heavy rains and gusty winds over portions of the Lesser Antilles, the Virgin Islands, and Puerto Rico tonight.

These conditions should spread westward across the Central Caribbean Sea and reach Hispaniola by Monday and Jamaica and Cuba by Tuesday.

The National Hurricane Centre says interests in these areas and elsewhere in the Caribbean Sea should continue to monitor the progress of this system.

Meanwhile, an official from the Meteorological Office said a second weather system that was headed to the Caribbean has completely dissipated.

National Disaster Coordinator of the National Emergency Management Agency, Carl Herbert noted that there have been no reports of injuries or damage from this passing tropical wave.

He is also encouraging everyone to continue to monitor local media for more information about developing weather systems.