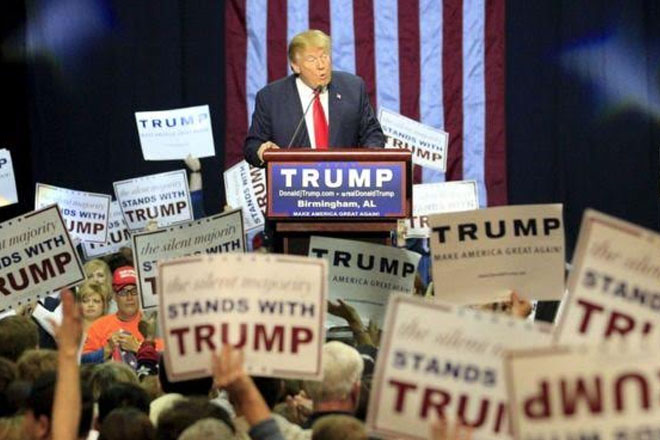 (BBC) A US mayor has said businessman Donald Trump “is plain wrong” in claiming Arabs in his city cheered the attacks of 9/11.

Mr Trump, who is running for president, said he saw “thousands and thousands” of people in New Jersey celebrating.

But the mayor of Jersey City said no such thing happened and accused the Republican of “shameful politicising”.

Mr Trump, who leads his party’s race for the White House, has also urged increased surveillance of Muslims.

His comments come after the attacks in Paris which left 130 people dead, and evidence suggesting that some of the attackers used refugee routes to enter the country.

Since the attacks, the issue of national security and threat of homegrown terrorism has come to dominate the national political conversation.

“I watched when the World Trade Center came tumbling down,” he said at a rally in Alabama. “And I watched in Jersey City, New Jersey, where thousands and thousands of people were cheering as that building was coming down.”

Asked to explain on a Sunday morning political talk show, the business mogul said: “There were people were cheering on the other side of New Jersey, where you have large Arab populations.”

The mayor of Jersey City, Steven Fulop, released a statement later which said: “Trump is plain wrong, and he is shamefully politicising an emotionally charged issue.

“We were actually among the first to provide responders to help in lower Manhattan.”

One of Mr Trump’s rivals in the presidential race, Former New Jersey Governor Chris Christie, said he did not remember hearing of any celebrations.

“I do not remember that, and so it’s not something that was part of my recollection,” Mr Christie told local media.

“I think if it had happened, I would remember it, but, you know, there could be things I forget, too.”

For years, rumours have circulated on the internet alleging that US Muslims in the city of Paterson in New Jersey cheered the attacks. However, the claims were denied by police and religious leaders at the time.

At the same rally on Saturday, Mr Trump was interrupted by a demonstrator from the Black Lives Matter movement.

In response, the businessman said: “Get him out of here. Throw him out!”

The demonstrator was seen on a video captured by a CNN reporter being shoved on the ground, punched and kicked.

“Maybe he should have been roughed up, because it was absolutely disgusting what he was doing,” Mr Trump said on Fox News on Sunday.