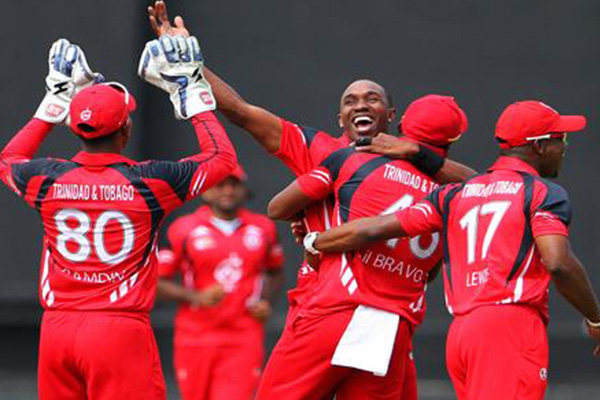 Port-of-Spain, Trinidad – Hosts Trinidad and Tobago powered their way to the final of the NAGICO Super50 regional cricket competition when they demolished Jamaica by seven wickets in the first semi-final played at the Queen’s Park Oval here Wednesday.

Having won the toss and dismissing the Jamaicans for 49 off  24.2 overs, Trinidad and Tobago knocked off their target in just 13.1 overs rushing to 51 for three off 13.1 overs.

Trinidad’s captain Dwayne Bravo made early inroads into the Jamaican line up scraping the cream of the top order with three of the first four wickets to fall. He ended with final bowling figures of three for  10 off six overs.

Bowling with swing and accuracy Bravo sent back John Campbell caught behind for a duck and trapped Kenar Lewis leg before wicket for two. Tamar Lambert went in similar fashion leaving a delivery alone  before he had scored. In between that flurry of wickets Jamaica lost Nkrumah Bonner  caught at short mid wicket pulling at Ravi Rampaul  for just one.

They never recovered from four wickets for five runs. In the end only two Jamaican batsmen reached double figures, Andre Mc Carthy  who was one of four victims of  Rayad Emrit perished for 16  lofting to mid-wicket and Jerome Taylor who was undefeated on 13.

Emrit continued where Bravo and Rampaul left off to  account for Dave Bernard one,  Andre Russell four and last man Andrew Richardson for no score to finish with the impressive figures of four for 19 off 6.2 overs. Ravi Rampaul claimed two for six off five overs.

Trinidad and Tobago also started shakily losing the aggressive Evin Lewis  for no score caught at mid on by Andre Russell pulling at Jerome Taylor.  Back in the Jamaica side after a long layoff due to injury, Taylor also sent back  Imran Khan leg before for one and  Lendl Simmons who played on attempting a square cut when he had reached 21.

The Bravo brothers then guided the Trinidadians safely to their target. Darren Bravo remained 23 not out and  Dwayne who was named man of the match hit the winning runs with a nonchalant  boundary to mid on off Nikita Miller to be  undefeated on five.

Jerome Taylor had an impressive spell with a  haul of three for 11 off six overs.

Trinidad and Tobago will now meet the winner of the second semi-final match between Barbados and Guyana scheduled for the same venue on Thursday.

The final take place on Saturday.