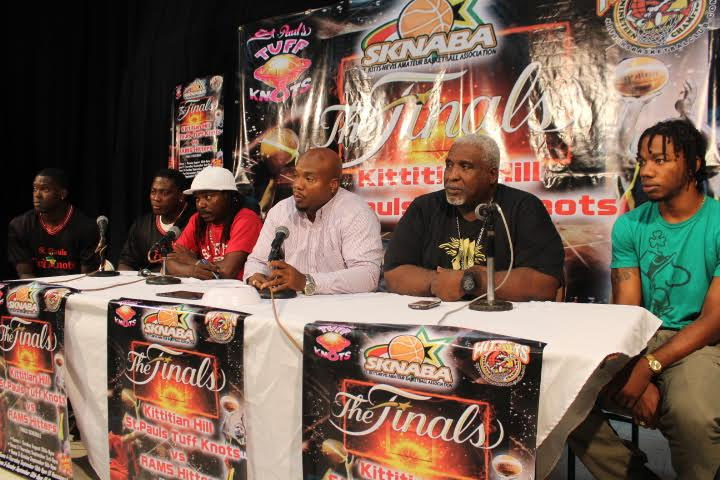 Tuff Knots and Hitters Ready for The Finals

(ZIZ) –The Kittitian Hill St. Paul’s Tuff Knots and the Rams Hitters are gearing up for their showdown at the St. Kitts-Nevis Amateur Basketball Association’s Premier Division Finals.

The five-game series kicks off on Sunday.

On Wednesday afternoon, players and officials from both teams were featured at the Finals’ Media Launch at ZIZ Studios.

Coach of the St. Paul’s Tuff Knots, St. Clair Buchanan said he is very confident that his team will come out on top.

“I’m expecting a very, very good, high-quality, high-standard game. ‘Cause it’s two tough teams coached well by two good coaches and as I said, I’m expecting a good game and for the St. Paul’s Tuff Knots to be victorious by the end of game three. That’s all,” he said.

Hitters’ coach, James “Barman” Hanley, said although they will be missing a few players from the semi-finals, the overall team is strong enough to bring victory.

“We look at what we have. For the entire season, people like Jah Love have been playing forward and sometimes the centre because our team is a small team. But getting back some of our senior players who have been injured and so forth, would be a whole different, you know.and our team, we have a very quick team. They’re young and they’re quick. And once they do what the coach says we’re not going to have a problem,” he said.

St. Paul’s Tuff Knots player, Nashorn Maynard, said while he’s confident that St. Paul’s will take the title in three games, he is not underestimating his opponents.

“I admire the Hitters team. I know they have a lot of shooters. Their guards, to me, is the strength of their team. And the coach has already analysed it and sent us the information on each player. We’re not underestimating nobody. We know what we have to do. We know what their strength is and what we’re going to take away from them so that we can win the game confidently,” he said.

Meanwhile, Tyrone Hutchinson, a senior member of the Hitters team spoke of why it’s important that fans go out and support the finals.

“As any athlete, any player, it is very important that you have some sort of support. No matter how tough or easy the game might be, we always still need that extra encouragement, that extra boost, just in case you make a little blunder, or a little slip, an extra hand to pull you back up and get you going again. So the fans are very important to come out and watch the Finals, starting on Sunday. We’d like all of the Rams Hitters fans and the non-Rams Hitters fans, the bandwagoners, to come out and support the teams,” he said.

All games will take place at Basketball City at 8pm.