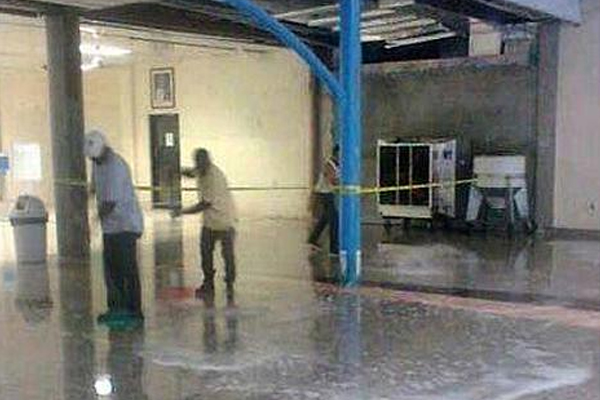 Access to government offices was impacted by the floods. Members of the public and government workers will be forced to step out in ankle deep water come Monday morning unless the rain subsides and Engineering Management Services (EMS) officials implement an urgent plan to clear the drainage system in the area.

Elsewhere, Providenciales airport workers were forced to take up brooms and sweep the water out of the new airport terminal, which is 90 percent complete. The new open design appears to be incapable of handling the type of downpour that usually occurs from tropical depressions and storms that pass annually.

The terminal’s new roof system faced its first test this weekend and the design and construction appear to have failed to cope with the conditions.

Sunday’s American Airlines flight from Miami was cancelled due to the storm.

Cristobal is expected to produce rainfall totals of 4 to 8 inches over the Turks and Caicos Islands, as well as the southeastern and central Bahamas through Tuesday, with isolated amounts around 12 inches possible.

At 5:00 pm EDT on Sunday, the centre of Tropical Storm Cristobal was located about 155 miles east-northeast of Long Island in The Bahamas, moving toward the north near 8 mph.

According to the National Hurricane Center in Miami, a general motion toward the north, with a decrease in forward speed, is expected during the next couple of days. On the forecast track, the centre of Cristobal will pass near or to the east of the central Bahamas through Monday. Maximum sustained winds are near 45 mph, with higher gusts. Some gradual strengthening is forecast during the next 48 hours.

Tropical storm conditions are expected to spread northward across the warning area through Sunday night.

Interests in the northwestern Bahamas should monitor the progress of this system.

Meanwhile, a tropical wave located several hundred miles southwest of the Cape Verde Islands is producing disorganized showers and a few thunderstorms. Unfavourable upper-level winds and proximity to dry air are expected to inhibit development during the next few days. However, environmental conditions could become more conducive by the end of the week while the system moves westward at about 15 mph.