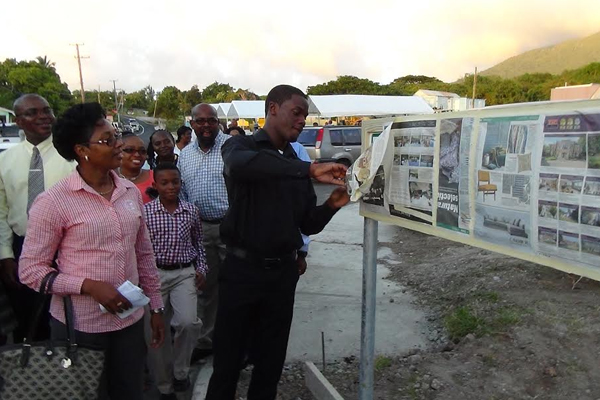 Sports Page — Almost five years after Nevis and the Leeward Islands’ first cricketer to make it to the West Indies team, Elquemedo Tonito Willet was honoured, with the former Grove Park named in his honour, two more Nevisian cricketers have received the signal honour of Streets named in recognition of their significant contributions as top class cricketers.

The former Grove Park was officially renamed the ELQUEMDO T WILLET PARK on the 28th July 2010 and on Tuesday 3rd February 2015, another important ceremony took place at the cricketing ‘university’ of Government Road, popularly referred to as BUKKO PARK.

The ceremony was ably chaired by Permanent Secretary within the Nevis Island Administration, Mr. Ernie Stapleton who pointed out that the ceremony in reality, served a dual purpose: One was to officially open the recently refurbished roads in the Government Road/Hamilton area and the other was the renaming of the said roads.

The man in charge of the Public Works Department, Mr. Deora Pemberton, gave a comprehensive overview of the road works and pointed out that the project was originally slated to cost in the region of four million dollars but as it was coordinated from a local perspective, it eventually only cost approximately 1.4 million dollars.

Minister of Works, Hon. Troy Liburd elaborated on the efforts of the Nevis Island Administration to utilize local expertise to complete the road works.

He noted that ‘Nevisians are talented people.’

He indicated that local engineers were utilized; the Public Works Department actually completed the project, working virtually every day of the week from 7am to 7pm. additionally, the services of local owners of trucks and heavy equipment were used during the course of the project.

Minister of Agriculture, the Hon. Alexis Jeffers alluded to his prowess as an opening batsman in his earlier life and noted that Carl Tuckett had struck him in the face, during those early years with a bouncer ‘and never even said sorry.’ To which Carl Tuckett promptly leaned forward and said ‘sorry,’ much to the amusement of the sizeable crowd.

Minister Jeffers then said that during an ensuing encounter, he promptly dispatched another Tuckett bouncer onto the roof of the Cotton Ground Police Station. He also indicated that he would have opened the innings in a Nevis trials match with Stuart Williams and stated that when Williams was on 45, he was only on 5.

He commended the two outstanding cricketers for their contributions to Cricket and to Nevis on a whole.

Minister of Sports, the Hon. Mark Brantley noted that he started with the two cricketing heroes, way back during their Primary school years and noted that at the time he was a budding leg spin bowler but as fate would have it, when the selection was made for a team to go to St.Kitts, he was not included and his interest took a different turn then.

He too was warm in his praise for the efforts of the two cricketing stalwarts and the recognition that they had helped to bring to the tiny island of Nevis.

The very impressive profiles of the two cricketing heroes were eloquently read by Permanent Secretary in the Ministry of Sports, Mr. Keith Glasgow who noted the following:

“Carl Tuckett went on to score many runs for Nevis and also secured many wickets with his medium pacers.

He forced himself into the Leeward Islands team in 1994 and never looked back.

He was a force to be reckoned with on the regional scene.

He eventually caught the eyes of the West Indies selectors on April 8th 1998 when he played his single one day international versus the England team in Trinidad.

He performed creditably. He did not have to bat as West Indies posted 302 for 5 wickets and reduced the Englishmen to 245 all out. Carl Tuckett had a hand in their demise with his 2 for 41 from his 8 overs.

Sadly, the West Indies selectors did not see it fit to call on his services again.”

“Stuart Williams made his test debut for the West Indies cricket team on April 16th 1994 in Antigua.

He was caught hooking off Faser in the first innings but was 21 not out in the second innings of the drawn encounter.

Williams still plays the game and is still the ever classy stroke maker and captains the Nevis Masters’ team whenever he is available.

When he is available is correct. After all, he is the current interim Coach for the West Indies senior team and travels widely.

When he is at home in Nevis, he serves as the national cricket coach and assists the younger cricketers to develop their craft.”

Chairman Ernie Stapleton then indicated how the roads would be named.

That stretch of road starting from Pinneys originally referred to as the Charlestown By pass road, leading all the way through the original PUMP ROAD and ending at the roundabout which is located next to the Delta Gas Pump station, will now be referred to as the ‘Stuart Williams drive.’

That stretch of road leading from the vicinity of BUKKO PARK, heading through to Hamilton village, will now be officially referred to as the ‘CARL TUCKETT BOULEVARD.’

Stuart Williams who is the interim coach for the West Indies team, is currently away in Australia on world cup duty with the team but was ably represented by his son, Saeed Williams who has already represented the Nevis senior team and his mom.

Carl Tuckett who was accompanied by his wife Sonya and son Carlon, who is also a budding little cricketer, spoke eloquently in his response.

He deemed it a tremendous honour and thanked God and the Nevis Island Administration for bestowing the signal honour to himself and Williams and also thanked the current and past Island Administrations for the assistance given to Stuart and himself during their cricketing careers.

He thanked his wife Sonya and son Carlon, who he referred to as his ‘biggest fans,’ and thanked his first coach Elquemedo Willet who assisted Stuart and himself from childhood to master the game of Cricket. He thanked his All stars club members and his teammates at all levels throughout the years and the Nevisian public at large.

Premier of Nevis and a former top cricketer, the Hon Vance Amory also lauded the achievements of the two cricketing heroes and noted that his cabinet had no hesitation in approving the proposal of renaming the roads in their honour.

He challenged other young sportsmen and women on the island to strive to excel in their various fields of endeavour as there are so many things to be achieved when persons excel.

He pointed to the two cricketers as outstanding role models who should be exemplified and had high commendations for the work ethics of former West Indies cricketer, Elquemedo Willet who assisted the two cricketers in developing their game.