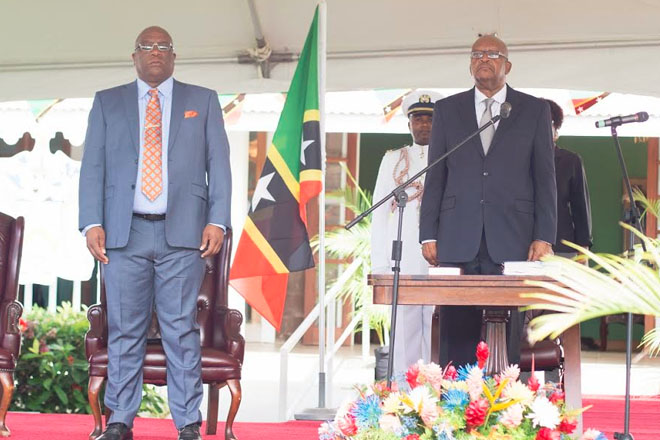 (ZIZ News) — The general public got a chance to be part of the swearing in of the country’s fourth Governor General since independence, Samuel Weymouth Tapley Seaton CVO, QC, JP.

Although Seaton was officially sworn in on September 2nd, Thursday morning’s ceremony, broadcast live on ZIZ Radio and Television and streamed online, was held to include more members of the general public.

Top government and legal officials, employees within the public and private sectors, members of the clergy, well wishers and friends gathered at Government House for a special ceremony, known as a Guard of Honour, for the country’s Governor General.

A Guard of Honour is a ceremonial event practiced in the military and sports throughout the Commonwealth of Nations as a mark of respect.

The country’s Prime Minister, Hon. Dr. Timothy Harris and members of his Cabinet, including Nevis’ Premier the Hon. Vance Amory were among the dignitaries present, so too were Her Ladyship Hon. Justice Marlene Carter, who administered the Oaths of Office and Allegiance; the country’s Deputy Governor General, His Honour Eustace John CMG; the country’s first Prime Minister, Rt. Hon. Dr. Sir Kennedy Simmonds and Sir Probyn Inniss, a former Governor.

The ceremony, and venue more specifically, was described by the honouree as “a tropical paradise” when he stepped to the podium to address the gathering. His six-minute speech was centred on the theme “giving thanks” as he recorded appreciation to members of his immediate family and other persons who had been instrumental in his life.

“It is right to give thanks unto the Lord. From this biblical admonition to us all, to the universally accepted principle of giving thanks, I adopt this mantra as I stand here today as your Governor General. I thank Almighty God for bringing me to this new level of national service,” he said.

“I owe a great debt of gratitude to my parents, William and Pearl Seaton, who imbued me with a desire to render national service. Their example at all levels, be it political on a regional basis in the West Indies Federation on the part of our dad, to our mother’s daily dedication and devotion to service to the public, their lives served as outstanding examples of service without fanfare or acclaim,” he added.

His remarks came after those by Prime Minister Harris, who used the opportunity to highlight some of Seaton’s major accomplishments.

“The Federal Cabinet and indeed I should say the entire national community, enjoins all in congratulating the Governor General on this remarkable accomplishment, which, in our collective opinion, could not have been conferred on a more deserving son of the soil. When one examines the life of our newly installed Governor General, one realises that his latest accomplishment forms part of a long record of distinguished national service and recognition that has characterised his life,” he said.