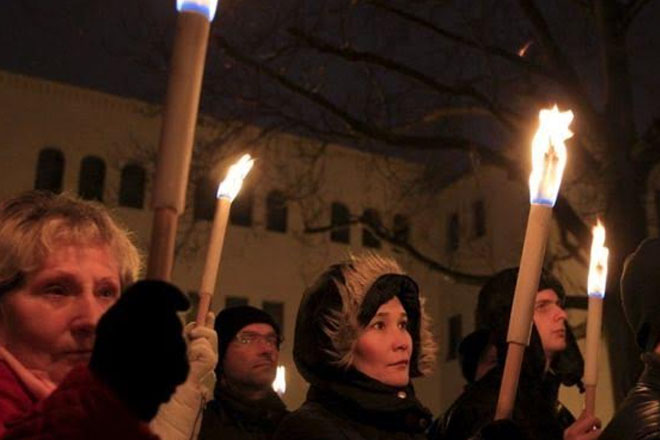 (BBC) US and other diplomats joined a rally in Hungary against a planned statue honouring a pro-Nazi minister who fomented anti-Semitism in the 1930s.

The diplomats were with several hundred Hungarians at a candle-lit protest in Szekesfehervar, southwest of Budapest.

The town’s mayor says a private foundation is entitled to honour Balint Homan with a life-size bronze statue.

The US government’s special envoy for combating anti-Semitism, Ira Forman, said “we’re shocked by it”.

Hungary’s Jewish community has urged the right-wing Fidesz government of Viktor Orban to prevent the statue going up.

As a government minister in the 1930s Balint Homan spearheaded anti-Semitic legislation and in 1944 called for the deportation of Hungarian Jews.

When the Nazis invaded Hungary in 1944 some 424,000 Jews were deported to the Auschwitz death camp, where nearly all of them died.

Homan, a historian, was in the Arrow Cross, which also slaughtered thousands of Jews on the banks of the Danube.

In communist-run Hungary in 1946 a court sentenced Homan to life imprisonment for voting to declare war on the Soviet Union in 1941. He died in prison in 1951.

The Jewish population of Hungary is estimated today at 35,000-120,000, the World Jewish Congress says. The higher estimate is the figure given by the Hungarian Jewish organisation Mazsihisz.

Establishing a precise figure is difficult because definitions of Jewish identity differ and many Hungarian Jews are married to non-Jews.