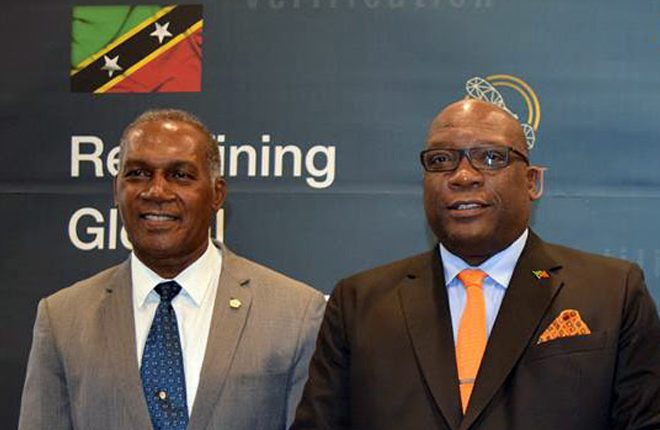 The Prime Minister of St. Kitts and Nevis, Dr. the Honourable Timothy Harris, and Senior Minister, the Honourable Vance Amory, are among seventy (70) distinguished alumni of the University of the West Indies (UWI) who will be recognized and honoured by the regional institution this week.

The ceremony to honour the seventy outstanding alumni forms part of a variety of celebratory activities being held this year as the internationally respected regional institution continues its observation of its 70th anniversary of service and leadership across the region.

The ceremony will be held on Wednesday, October, 2018, at the Quadrangle at the UWI Cave Hill Campus in Barbados, starting at 10am.

The Honourable Vance Amory, the former Premier of Nevis and current Senior Minister in the Team Unity Administration of St. Kitts and Nevis, graduated with a Bachelor’s Degree from UWI in 1973.

Prime Minister Harris graduated from the Cave Hill Campus in 1988 with a First Class Honours Degree in Accounting, having won the coveted Victor Cooke Prize for Best Accounting Student. In 1992, Dr. Harris then graduated at the top of his class from the St. Augustine Campus with a distinction in the Master’s Degree Management Studies Programme.

The St. Kitts and Nevis Prime Minister has also served on several councils and committees for the University of the West Indies.

Earlier this year at the 29th Inter-sessional Meeting of the Conference of Heads of Government of CARICOM held in Haiti, Prime Minister Harris, CARICOM’s lead Head for Human Resource Development, was tasked with leading the settlement efforts for arrears owed to UWI by regional governments.

Dr. Harris’ work in this regard has since led to commitments by Caribbean Heads to make payments both in cash and kind to the university.

Prime Minister Harris’ leadership on this matter was recognized by top UWI officials including UWI Professor Densil Williams, who was tasked with working on the debt resolution project by the Office of the Vice Chancellor.

Professor Williams was quoted in an article by the Jamaica-Gleaner posted on July 8, 2018, as saying Prime Minister Harris “has been remarkable in leading the conversation with his prime ministerial colleagues on this matter,” adding that “results so far were positive, inclusive of commitments to provide cash to the university.”

The University of the West Indies, founded in 1948, has evolved from a university college in Jamaica with 33 medical students to an internationally respected regional university with near 50,000 students.