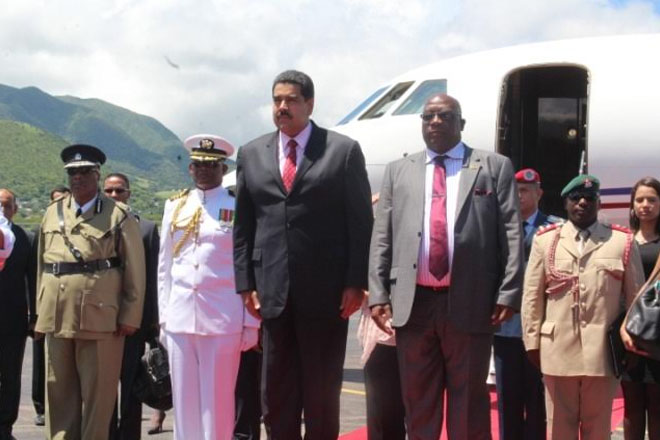 (ZIZ News) – Among the topics covered by Venezuelan President, Nicolas Maduro Moros during his speech at the Robert L. Bradshaw International Airport on Wednesday was the purpose of the various Petrocaribe agreements across the region.

He spoke with pride of Petrocaribe and said its formation had brought about advances in a number of areas.

“Petrocaribe is responsible for the financial, economic, social and political stability that we enjoy today in our region and we have just to see the instability that we observe in Africa, in the Mediterranean and all the suffering in those regions and in the Middle East,” the Venezuelan leader stated.

“Petrocaribe, thanks to its creation 10 years ago, we can say that we have established and achieved a stability that we need to preserve and strengthen even more,” he continued.

According to President Maduro, solidarity, mutual respect and equality in the treatment among member countries are among the hallmarks of the Petrocaribe arrangement. He said those concepts were important to leaders Simon Bolivar and Hugo Chavez.

“It is precisely the concept of Simon Bolivar 200 years ago when we started our struggle for Independence. It is precisely the concept of our Commander Hugo Chavez who is today, more alive than ever. It is only together in Latin America and the Caribbean that we can truly be stronger in this 21st century in the context of freedom, independence and dignity,” Maduro said.

President Maduro spent a few hours in St. Kitts on Wednesday after receiving a true dignitary welcome with a Guard of Honour at the Robert L. Bradshaw International Airport.