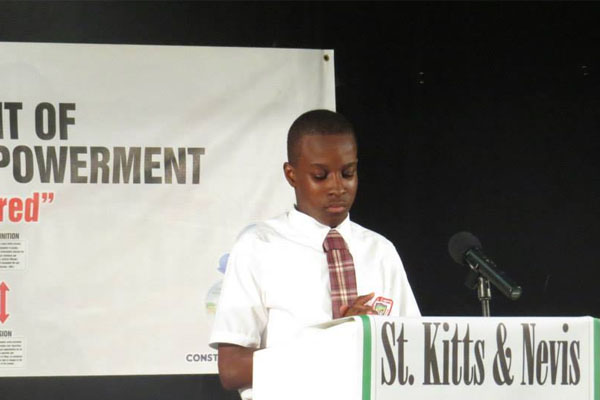 (ZIZ News) — On Monday, Khale Thomas of the Verchild’s High School was presented with a cheque valued at EC$1,000 and a dinner voucher for four persons, courtesy of Christophe Harbour Development Company.

Thomas received the grand reward for winning the Independence Elocution Contest ahead of four students from other secondary schools on the island.

Christophe Harbour Development Company was represented at the brief ceremony by Akila Browne.

She said, “I just really want to encourage the students to be willing to participate in these types of contests by putting your education as the number one priority as well and ask that your teachers continue to support you and to work along with you in contests such as these. Christophe Harbour is always willing to help wherever there is a need in youth development and we also thank the Department of Constituency Empowerment for spearheading this important initiative.”

A very grateful Khale Thomas expressed his appreciation to those who contributed to his success.

The Verchild’s High School’s English Department was also presented with a cheque for EC$750.