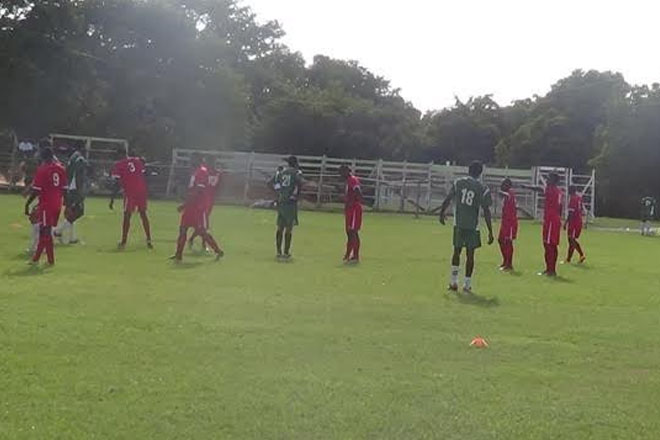 Sports Page — A fair sized crowd was on hand at the ET Willet Park on Sunday 20th September to witness an out of season friendly Football encounter between Rams Village Super Stars of St. Kitts and CCC Bath United of Nevis.

The CCC Bath United team relished in the occasion of engaging their more highly favoured opponents, having being promoted to the premier division in the SKNFA Football league for the next season, after their wonderful exploits from the last Football league.

Referee Virgo had his work cut out as it turned out to be a fast paced and intense encounter.

Both teams bungled clear cut chances in the first half and at the half time whistle, it was a nil-all situation.

The action intensified in the second half as both teams emerged from the bench, obviously intent on scoring. However, a mixture of great defensive work on both sides of the circle and a few more bungled chances, combined to ensure that at the end of the final whistle, the final score line was Rams Village Super stars nil and CCC Bath United nil.

A score line which was received by the CCC Bath United fans with some pleasure as their team had held one of the top teams in St. Kitts to an honourable draw and in the mind of one supporter: ‘We should have won the game, because generally, we played the better ball.’