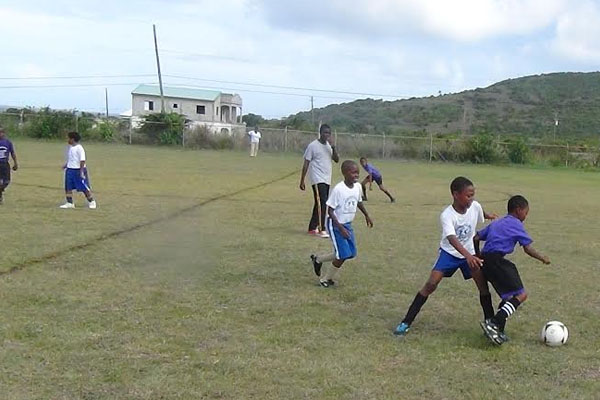 Coach at the JLPS, Shamyse Bartlette was quick to point out that her team comprised mainly of third and fourth graders, while the opponents were mainly fifth and sixth graders.

However, it was a very intense game and it was a joy to see the constant battles between the burly defensive player for VOJN, Peter, embroiled in exchanges with a brave but much smaller Jareece Browne of the JLPS team.

Jareece did not back down, whereas other players backed away when Peter was coming through.

At the end of the game however, the VOJN team was a little too much for the JLPS team and won the game quite handsomely with a score line of 3 goals to nil.

The goal scorers for the home team were: Rajani Didder; Shaeen Roberts and Keondre Lewis.

On Tuesday 7th October, The Elizabeth Pemberton Primary School engaged the St.James’ Primary school at the home ground at the FLATS in Cole Hill.

It was a hard fought game and both teams seemed to be easily matched.

However, just before Referee Keneisha Powell blew the half time whistle, St.James’ top striker, Tyri Jeffers, found a space and ran through to score the only goal f the match.

Both teams played a good game right up to the final whistle and despite some blotched chances on both sides, the support crews on the side lines were thoroughly entertained.

Today, Wednesday 8th October, should see another intense game as the Maude Cross Preparatory School takes on the Ivor Walters Primary at the ET Willet Park, starting at 1.30 pm.