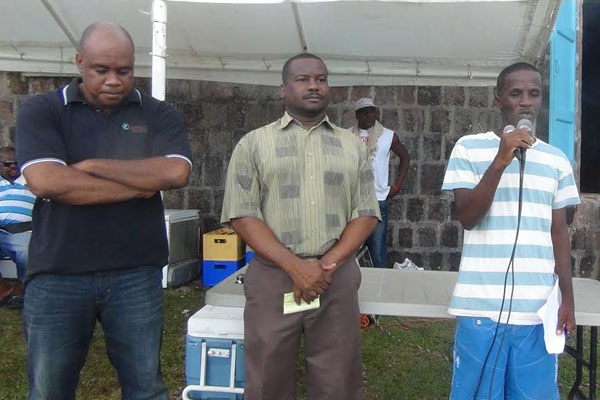 Sports Page — Sunday 2nd November was a big day for the Rawlins community. That is when the Village Premier league (VPL) was launched.

The opening ceremony of the league took place at the HardTimes playing field at about 1pm and commenced with an invocation by Mrs. Donnette Huggins.

The chairperson was chief organizer and Community Liaison officer in the Gingerland area, Michael WISE Herbert.

Addressing the gathering as well, was Permanent Secretary in the Ministry of Sports, Mr. Keith Glasgow who saluted Herbert and his organizing committee for coming up with the idea of the league and indicated that it could have a far reaching impact on the development of cricket in Nevis and indeed in the West indies.

He noted that his Ministry welcomes all activities that help to reduce the risks that are prevalent in the society and that lead to deviant behaviour.

He also congratulated Mr. Hardtman and his associates for coming forward to sponsor the league.

Mr. Vaughn LEGGIE Walters represented Mr. Hardtman and Associates and noted that this was one way that his company sought to give back to the community.

He apologized for the absence of Mr. Hardtman who had a prior engagement.

He indicated that his company will do whatever possible to help community organizations in promoting positive activities that will effectively help in fighting crime.

He wished the tournament every success.

Another of the organizers of the tournament, Mr. Lemuel Pemberton delivered the vote of thanks.

A knockout tournament then ensued which was a six a side tournament which involved players from all across the island.

It came down to semi finals encounters between JAHBASS’ team and NEVLEC and later, Rawlins versus Easterns.

The match of the day was the NEVLEC versus JAHBASS team encounter.

NEVLEC led by Curtis Morton Jr racked up a stunning 49 runs in two overs with Morton slamming the ball to all parts of the grounds and then well outside of it.

The JAHBASS team responded in kind with Tonito Willet taking some 29 runs from the first over.

However, it was Morton again with his over that proved the undoing of Willet…. and his team gave up the ghost.

Rawlins won over Easterns in the other semi final and set up a final between home team Rawlins and NEVLEC.

Rawlins got to 29 from their allotted two overs and NEVLEC, shockingly, fell short by some five runs.

Rawlins winning the knockout tournament much to the joy of the scores of home fans on hand.