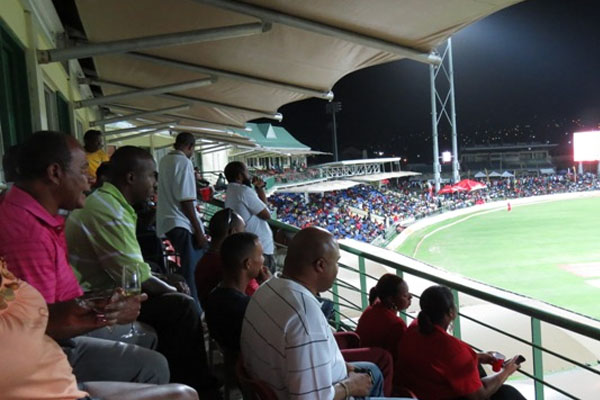 “Nine days after the CPL is completed, we will be hosting Bangladesh vs the West Indies on the 25th and 27th of August which makes St. Kitts as the only territory in a very long time to host 11 international games right here,” said Phillip at the recent Conversations for Progress town hall meeting in St. Peter’s.

He told participants that in early September, St. Kitts will host the female West Indies team here. New Zealand vs West Indies Women will be played here in September of this year. A request was made for St. Kitts to be used for England’s tour to the West Indies in 2015 for them to get acclimatised to the Caribbean.

“They will be here for 10 to 15 days to practice before they start their test series in the Caribbean and the good thing about it is that they will be playing against a St. Kitts select squad during the training.

On the CPL already underway, Mr. Phillip ask, “What has your government done so correctly that it could secure these games in a most competitive environment where there are many grounds that would have been seen as ideally suited to host these big games?”

“First, we have benefitted from the improvement of sporting, accommodation and infrastructure done between 1995 and the present. The grounds at Warner Park which were renovated, successfully hosted games of the 2007 ICC Cricket World Cup and is now seen regionally as the most spectator friendly and one of the best to host T-20 games which naturally have a party type atmosphere. Added to that, Warner Park now has the best lighting in the region suitable for night games. Our investment in 3700 lucks of light makes play in the night as natural as playing in the day. And if I have to give you a little perspective, the International for lights is 2300 lucks, not to bore you with the lighting parameters, but to look at the numbers, the International Standard is 2300 lucks and St. Kitts has 3700 lucks of lights,” said Mr. Phillip, who is also Minister of Youth Empowerment and Information and Communications Technology.

He said St. Kitts’ Robert L. Bradshaw International Airport has an airlift capacity that gets regional and international patrons of the game to St. Kitts and back home hassle free. “This is where the collaboration with the Ministries of Tourism and International Trade has been most beneficial.”

Minister Phillip also explained that St. Kitts and Nevis also has a track record of delivering.

“In 2000, we hosted CARIFESTA, it was a success. In 2007, we hosted the Orange Package Game of the ICC Cricket World Cup that too was a success. Then in 2010, we hosted some matches in the ICC Women’s Cricket World Cup Games and they too were successful. In each case we have proven that we deliver and deliver well, therefore, the benefits of these CPL games will be great for vendors and all spectators. However, we believe that there must be on-going, long-term benefits for our nation and we are discussing those issues at this moment with the CPL,” said Minister Phillip.

He said that government through the Ministry of Sport has negotiated 5 minutes of media time each CPL match day to promote the tourism product of St. Kitts and Nevis to an estimated viewership of 72 million people around the world.

“This kind of marketing of St. Kitts and Nevis is something we could never budget for and it is an advantage we must seek to maximise,” he said.

“During these days, we must seek to promote Mr. Carl Tucket of Nevis and Mr. Wycliffe Mitcham of St. Kitts who will be umpires in some of the games to be played here in St. Kitts. This opportunity will be their exposure as umpires on such a grand scale and their advancement is a great potential benefit for the promotion of our Federation of St. Kitts and Nevis,” said Minister Phillip.

The additional benefit of the CPL is to see international greats and stars like Brian Lara, Ian Botham, former anchor-man of CNN Peir Morgan play a ‘Celebrity Beefy Bash’ game alongside our local legends like Stuart Williams, Luther Kelly and Livingstone Harris.