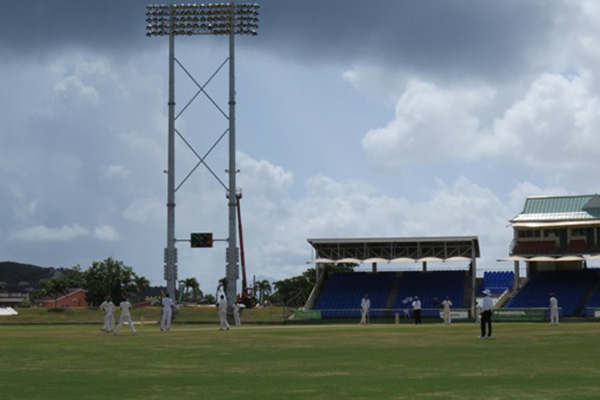 Basseterre, St. Kitts (CUOPM) — It will be history in the making on Thursday March 6th 2014 with the commissioning of the Warner Park Lighting and Visual Media Systems.

It will be a proud moment for Minister of Youth Empowerment, Sports and Information Technology, the Hon. Glenn Phillip, when the state of the art lighting facility, said to be the best in the region by the President of the West Indies Cricket Board (WICB).

“The government of St. Kitts and Nevis has invested a considerable amount of money in the lighting facility at Warner Park. What we have done is we have positioned ourselves to host not only International matches, but also start an After School Programmes for our kid. It’s a holistic development that we are trying to achieve here on St. Kitts,” said Mr. Phillip at the recent Cabinet Press Conference.

He announced that St. Kitts and Nevis will be hosting it’s first-ever day/night match when the Leeward Islands will play Jamaica. “The game starts at 2 pm and will go down to close to 10 ‘o’clock in the evening or thereabout.”

“Let me also say that we have had discussions with the CPL (Caribbean Premier League) and we have placed bids for a number of games including, the semi-finals and the finals of the CPL matches to be hosted here in St. Kitts. It is just a matter of the announcement by the CPL to know whether we have won the bid or not,” said Minister Phillip.

He said as the Federal Minister of Sports he was extremely confident that the facility at Warner Park is second to none.