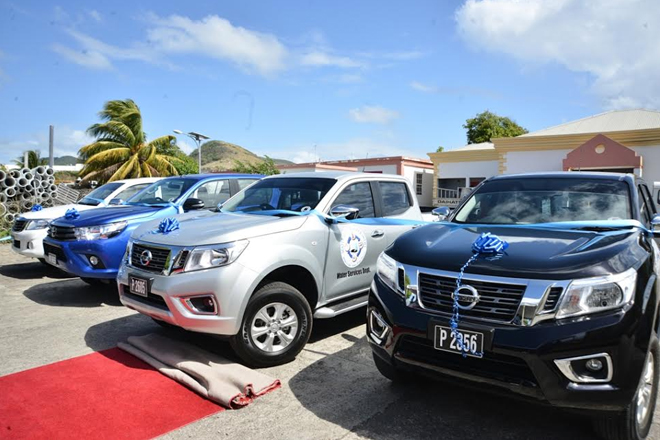 During the handing over ceremony of the six vehicles held on Tuesday, March 22, Manager and Water Engineer, T. Denison Paul, thanked the Minister of Public Infrastructure, Honourable Ian Patches Liburd, for his strong support of the department.

“He promised us 13 months ago when he became Minister that he would be a strong advocate for the Water Department,” said Mr. Paul, noting that the minister asked in return that the vehicles be taken care of.

Mr. Paul added that none of this would have been possible without the backing of the Prime Minister, Dr. the Honourable Timothy Harris.

“I know from personal experience of his commitment to his service to the people,” said Mr. Paul.

“I have been at the receiving end of his cause at all hours of the day and night requesting assistance for his constituents who have experienced water issues. His support in this regard show be a surprise to no one.”

General Manager of the Development Bank, Lenworth Harris, commended both the Minister and Mr. Paul for their efforts in procuring the fleet for the persons who “provide this essential service.”

He added that he also saw the need for the new vehicles as the employees have to travel through rough terrain. Mr. Harris said that donation was also made as he was made aware that a number of vehicles were more than a decade old and the need for reliable and safe transportation was necessary.

“Our emphasis mainly is on development, the development of human resources, social development and economic development,” he said. “This donation covers all aspects of it.”

Calvin Edwards in the Ministry of Finance was also instrumental in the acquisition of the vehicles. It was noted that the fleet was obtained to the tune of $400, 000.

“We believe in order to do your work you must be provided with the tools which are needed,” said Mr. Edwards. “We recognised the condition of the vehicles which would have probably broken down several times and hindered productivity.”

Minister Liburd, while accepting high praises from the department, extended them to Mr. Paul who was actively involved in this endeavour.

“When I assumed office in this ministry, which is responsible for water amongst other subjects, I requested from each Head of Department a fiscal and performance review,” said the minister, noting that Mr. Paul brought to his attention the need for the vehicles.

The vehicles will not only carry a significant number of individuals to their locations but will also decrease the time taken to reach areas which could only be reached with a proper mode of transportation.