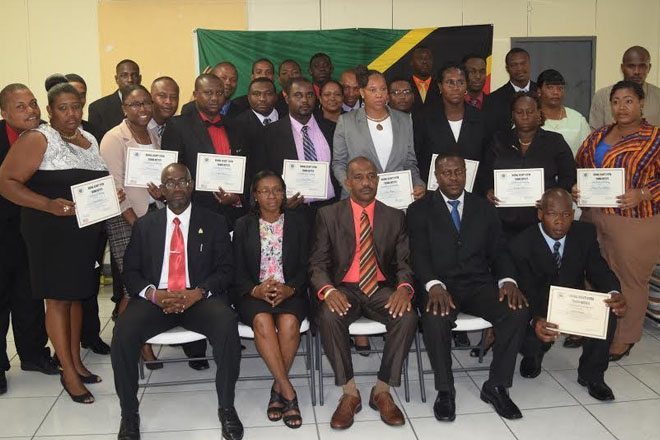 “We must be aware and always alert” says Ag COP Liburd

Basseterre, St. Kitts (RSCNPF) — In his address to the recent graduates of the Regional Security System (RSS) Training Institute Crime Scene First Responders Course, Acting Commissioner of Police (COP), Mr. Stafford Liburd encouraged the need and importance of the officers to be aware and alert of their surroundings.

“We cannot prevent crime; we cannot, so we have to detect it. We must be aware and always be alert.”

He indicated that this training serves as an improvement in the quality of service to be delivered to the public. “Take this training and go forward to better yourselves as officers and the force on a whole.”

The training sponsored by the RSS began on Monday, September 28th, 2015 and saw the participation of 27 officers of the Royal St. Christopher and Nevis Police Force.

In speaking with the Lead Facilitator, Inspector Roderic Walcott of the Royal Barbados Police Force, he indicated that the course provided the participants with the skills and knowledge necessary to function as First Responders at a Crime Scene.

He added that throughout the course, the participants were involved in many practical exercises and assignments which would empower them to develop the skills necessary to properly secure and manage crime scenes.

In attendance were Mr. Osmond Petty, Permanent Secretary within the Ministry of National Security along with Mr. Ian Queeley, Assistant Commissioner of Police with responsibilities for crime and other gazette officers.

The proceedings were chaired by the newly appoint Director of Communications for the Police Force, Mr. Grell Browne.