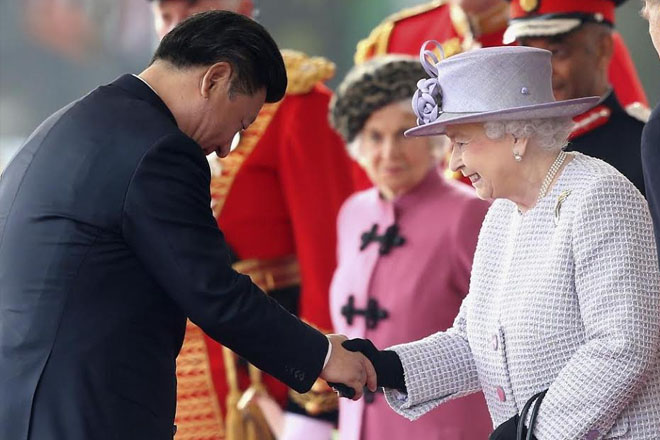 (London) – Chinese President Xi Jinping on Tuesday hailed the “bright future” of closer relations with Britain, addressing lawmakers as part of a pomp-laden visit during which more than $46 billion of deals are expected to be signed.

Britain rolled out the red carpet for Xi, who was honored with a 41-gun salute and given a ride in a gilded carriage with Queen Elizabeth before addressing lawmakers from both Houses of Parliament.

A few dozen protesters calling on Prime Minister David Cameron to raise human rights with Xi were outnumbered by the thousands of China supporters thronging The Mall, one of London’s most famous avenues, as Xi rode with the queen for a private lunch.

“It is fair to say that China and the UK are increasingly interdependent and are becoming a community of shared interests,” said Xi, who quoted Chinese proverbs, William Shakespeare and English statesman Francis Bacon in his speech.

Xi’s welcome was steeped in pageantry, underlining the growing importance of China to Britain: Cameron hopes the visit will cement a lucrative place for Britain as Beijing’s closest friend in the West.

Hailed as the start of a “golden era” in Sino-British relations, the visit, which will seal 30 billion pounds ($46.4 billion) in deals, has been criticized by activists who accuse Cameron of turning a blind eye to rights abuses.

It has also ruffled feathers among some of Britain’s traditional allies, such as the United States, where Xi’s visit last month was tainted by friction over cyber-theft and Beijing’s moves in Asian maritime disputes.

Police made sure the few dozen protesters had little chance of disrupting a carefully choreographed ceremony which included Xi accompanying the Duke of Edinburgh, the queen’s husband, to inspect the guard of honor before leading the procession.

Those protesting against China’s human rights record were kept far from the procession, with their banners all but eclipsed by “I love China” flags.

Shouting “Don’t trade away human rights” and “China: Buying UK’s silence on Tibet”, protesters expressed support for the Falun Gong, the spiritual sect banned as a cult in China, and called for independence for the people of Tibet.

Others took aim at what they called Xi’s crackdown on civil liberties since he took power in 2012. The visit “shows that England is not giving a damn about human rights”, said Aisha Nahmmacher, 24, from south London.

But they were drowned out by supporters who banged drums and held portraits of Xi as they took photographs outside Buckingham Palace, where Xi and his wife will stay as guests of the queen.

For Britain, the four-day state visit is the culmination of a three-year charm offensive to attract investment in infrastructure, nuclear power and the government’s planned transformation of northern England.

One deal expected to be signed during Xi’s visit is a plan for two state-owned Chinese utilities to invest in a 16 billion pound ($25-billion) nuclear power project being built by French utility EDF (EDF.PA) at Hinkley Point in southwest England.

Britain said more than 30 billion pounds worth of deals would be signed during the visit, creating some 3,900 jobs.

Britain has won praise from China for its discretion in dealing with human rights issues by raising them behind the scenes, a policy London says is more effective than hectoring Beijing publicly.

Cameron has said he will not duck sensitive issues such as the impact of cheap Chinese imports on struggling British steel-makers, however, and main Labour leader Corbyn has promised to raise rights when he meets Xi on Tuesday.

But any such sour notes, including Prince Charles’ decision to not attend a state banquet, are unlikely to spoil a visit that has been long in the making.

Britain was the top destination for Chinese money in 2014, with $5.1 billion in investment, according to law firm Baker & McKenzie. This year, it became the first Western nation to join the China-led Asian Infrastructure Investment Bank after Washington had pressed allies not to join.

In a pointed commentary before Xi’s arrival in Britain, Global Times suggested that critics were jealous. “Apparently the concept of a ‘golden era’ between the two countries has made some people uncomfortable,” it said in an editorial.

“This has hurt the twisted dignity of those who still consider the West the center of the world.”