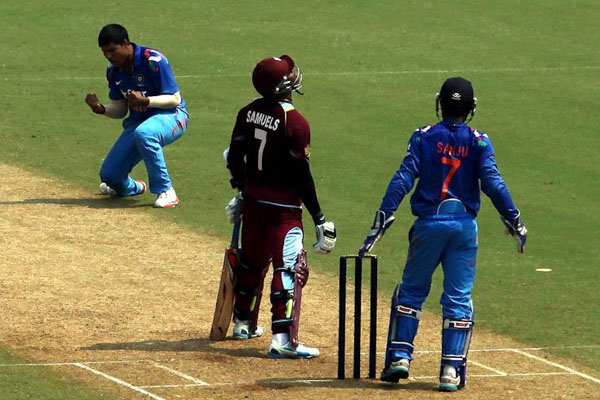 West Indies crash to embarrassing defeat against India A

A half century from Marlon Samuels saved the visitors some embarrassment but they crumbled against the Indian spinners and were bowled out for 148 in 38.1 overs after winning the toss and deciding to bat.

Unmukt Chand belted a half century in a 77 run unbeaten partnership with Murali Vijay for the first wicket as India A cruised to victory, losing one wicket in the process with 147 balls remaining.

Most of the West Indies batsmen, with the exception of Samuels, looked uncomfortable against the Indian attack which included Dhawal Kulkarni, Jasprit Bumrah and Amit Mishra who destroyed the middle order to curb any hopes of a recovery.

Mishra, who grabbed three for 26, removed the stumps of Darren Sammy, the captain for the game, and Kieron Pollard in successive overs to reduce West Indies to 76 for 6 after they were shaping to rebuild the innings at 70 for four.

Test captain Denesh Ramdin provided brief support to Marlon Samuels in a fourth-wicket stand that produced 32 runs which ended when Ramdin slashed at a Stuart Binny delivery and was caught by a diving Unmukt Chand at second slip.

Samuels soldiered on by scoring with powerful shots through off and down the ground in a top score of 56 which included nine fours.

The West Indies alarming collapse occurred in the presence of the former captain and now the chief selector Clive Lloyd and Richard Pybus, the director of cricket Leon Johnson looked uncomfortable before outside-edging an angled delivery to second slip in the fourth over, Lendl Simmons retired with a troublesome back and Darren Bravo stroked a couple of boundaries then lost his stumps.

Apart from the 28 extras and Samuels’ 56, the contribution of the remaining 10 men was just 64 which included the second best score of 21 from Jason Holder.

India A reached their target comfortably with Chand leading the way with his top score of 79 not out in which he struck 11 fours and two sixes.

Pacer Kemar Roach picked up the only Indian wicket by removing Vijay for 26, caught Samuels.