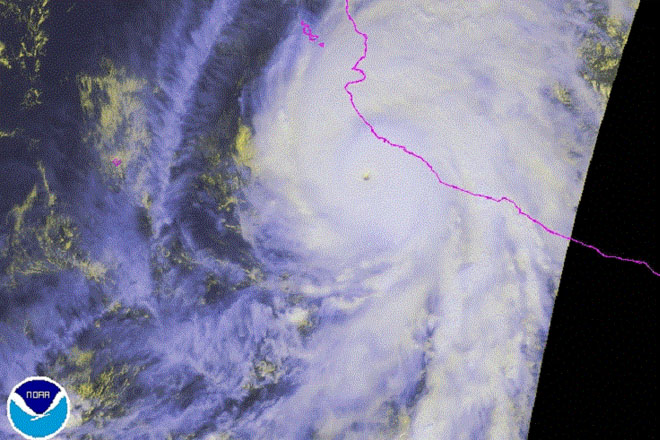 MEXICO CITY, Mexico, Friday October 23, 2015 – As the Caribbean gets a break from storm activity this Atlantic hurricane season, the most powerful tropical cyclone ever measured in the Western Hemisphere is barrelling towards Mexico with maximum sustained winds that have reached an unprecedented 200 miles per hour.

The very powerful and dangerous Hurricane Patricia is forecast to make landfall this evening as a catastrophic Category 5 hurricane in the Mexican state of Jalisco, which includes the popular coastal resort city of Puerto Vallarta as well as the inland metropolis of Guadalajara, Mexico’s second-largest city.

Officials have declared a state of emergency in dozens of municipalities in Colima, Nayarit and Jalisco states that contain the bustling port of Manzanillo and the posh resort of Puerto Vallarta. The governor of Colima ordered schools closed today.

Residents have been flocking to supermarkets and making last-minute measures ahead Hurricane Patricia’s landfall.

Hurricane Patricia is expected to dump 8 to 12 inches of rain over the Mexican states of Jalisco, Colima, Michoacan and Guerrero. Life-threatening flash flooding and mudslides are possible. Localized amounts of rain as high as 20 inches are possible.

A dangerous storm surge is expected to produce significant coastal flooding near and to the right of where the center of Patricia makes landfall. In addition, Mexico’s national water commission, CONAGUA, warned yesterday that waves of up to 39 feet may crash onto beaches near the landfall point.

In addition to its unprecedented 200 mile-per-hour sustained winds, Hurricane Patricia now holds the record for lowest pressure in any hurricane on record, with a minimum central pressure of 880 millibars breaking the record of 882 millibars set by Wilma almost exactly 10 years ago.

According to The Weather Channel, while a number of typhoons in the western North Pacific have been stronger, Patricia is by far the strongest hurricane in any basin where the term “hurricane” applies to tropical cyclones – namely, the central and eastern North Pacific basins and the North Atlantic basin, which includes the North Atlantic Ocean itself plus the Gulf of Mexico and Caribbean Sea.

Only one Category 5 hurricane has ever been known to make landfall on Mexico’s Pacific coast. That hurricane followed a path similar to that of Hurricane Patricia and struck near Puerto Vallarta in late October 1959, causing some 1,800 deaths.