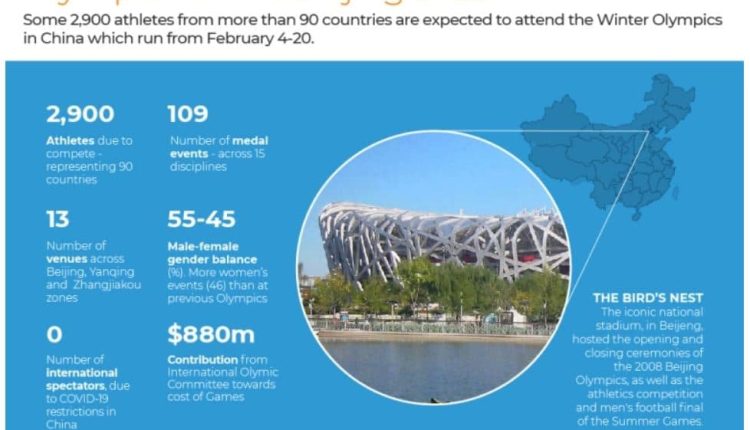 What You Need To Know About Beijing 2022

The 2022 Winter Olympics have kicked off under a cloud of COVID restrictions, diplomatic boycotts and questions over China’s treatment of Uighurs.

Almost 3,000 athletes from 90 countries are taking part in the Winter Olympics.

Where are the Olympics taking place?

Beijing becomes the first city to host both the Summer and Winter Games.

What time is the opening ceremony?

The closing ceremony will take place on February 20.

Are the Games taking place in a bubble?

Some 60,000 people, including athletes, coaches, officials, federation delegates, volunteers and media personnel, are expected for the event.

The events will take place within the “closed loop” that will allow them to move between accommodation and venues on official transport. They are not allowed to move freely in public.

Has anyone tested positive among those attending?

Since January 23, there have been 287 positive tests among games-related personnel from a total of 610,000 tests.

Are fans allowed at the Olympics?

No international fans are allowed at the Games.

Tickets have not been sold to the local population but instead organisers are distributing them to “targeted” groups of people.

Those receiving tickets will be required to undertake strict COVID-19 prevention measures before, during and after attending Olympic events.

Organisers are hoping for stadium capacities of at least 30 percent.

Why are some countries imposing a diplomatic boycott?

Canada, Australia, the United Kingdom and the United States are in a diplomatic boycott of the 2022 Winter Olympics over China’s human rights record.

Athletes from those four countries are taking part but government representatives will not be in Beijing.

China has warned the four boycotting nations will “pay a price” for their “mistake”.

Why is China facing backlash over its treatment of Uighurs?

The Uighurs (also spelled as Uyghurs) are an ethnic minority group mostly living in the Xinjiang autonomous region of China.

They are predominantly Muslims. According to official Chinese records, there are 12 million Uighurs, representing almost half the population in Xinjiang.

In 2018, the United Nations revealed at least a million Uighurs had been detained in “counter-extremism centres” in Xinjiang.

The report also revealed that a further two million Uighurs had been “forced into so-called re-education camps for political and cultural indoctrination” beginning in the middle of 2017.

China has rejected the allegations, saying its policies towards the Uighurs and other Muslim minorities living in its far western region are necessary to “fight extremism” and to promote upward economic mobility for the impoverished ethnic groups.

Have athletes been told to watch what they say at the games?

Behaviour by athletes that violates the “Olympic spirit” or Chinese rules could be subject to punishment, according to the organisers.

The International Olympic Committee (IOC) has made it clear that athletes are free to express their opinions on any matter in news conferences and interviews within the Olympic bubble, as long as it is not during the competition or medal ceremonies.

“Any expression that is in line with the Olympic spirit I’m sure will be protected and anything and any behaviour or speeches that is against the Olympic spirit, especially against Chinese laws and regulations, are also subject to certain punishment,” Yang Shu, deputy director general of Beijing 2022’s International Relations Department, said.

What sports are part of the Winter Olympics?

Which country will host the next Winter Games?

The Italian cities of Milan and Cortina d’Ampezzo will host the next Winter Games, scheduled to take place from February 6 to 22, 2026.