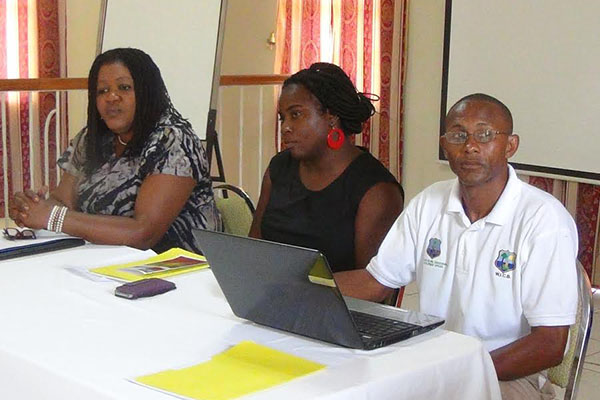 A very important one day symposium was held on Friday 9th May at the Red Cross Headquarters at Chapel Street in Charlestown.

It was a child protection workshop hosted by the West Indies Cricket board (WICB) in conjunction with the United Nations children’s fund UNICEF).

Leeward Islands Territorial Development Officer, Junie Mitcham outlined the seriousness of the one day course.  He pointed out that the WICB is in the process of revamping its current coaching education program as it seeks to standardize and meet the current international coaching bench marks.

The coaches were candidly informed that the three main prerequisites for coaches who want to operate under the WICB banner as the Board heads into this new direction are:

Facilitator of the workshop, Ms Glentine Wattley who is a Child Protection Official in St.Kitts, impressed on the coaches that they needed to take the course seriously as too many children across the world are being abused by people who they normally trust, including coaches.

Social worker at the Social Services Department in Nevis highlighted the gravity of the situation as it pertains to child sexual abuse in Nevis by pointing out that there have been 66 reported cases from 2008 to 2013.  She implored the coaches to help to make sure that the children are in a safe environment and urged them to report suspected cases of abuse.  ‘It’s better to make the report and there is nothing going on, than not make the report and something is happening,’ she stressed.

Over twenty coaches from the various schools across Nevis and Coaches involved in the grass roots program coordinated by the WICB, attended the workshop which culminated sometime after 4 pm that same day.