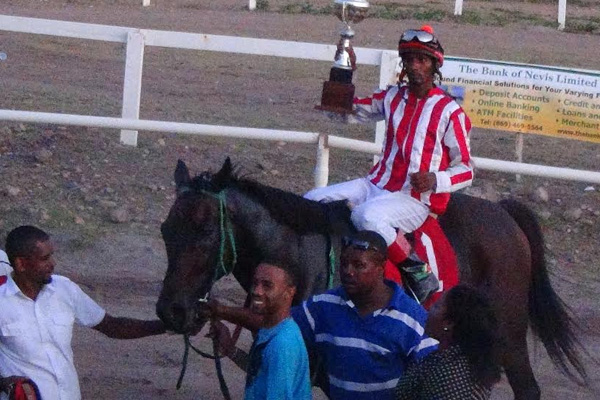 It was a proud moment.

This as the action climaxed at the Indian castle race track on Tuesday 16th September—National heroes day in the Federation of St.Kitts and Nevis-a public holiday.

It was the annual signature event of the Nevis Turf and Jockey Club in recognition of the contributions made by their own ‘national hero,’ the late Dan Bartlette.

It was race three of the four race card and after the frustrations of a few false starts, an exchange of words and the Jockeys and horses retreating to the stables, the race finally got on the way.

SHAKEN SHAY threatened momentarily but WILD CANDY was too far ahead coming down the home stretch and Navid Persaud pelted his whip airborne in jubilation.

The day however will not be recorded as one of the best days for the Nevis Turf and Jockey Club.

For one, there were too many false starts and numerous delays on the part of the jockeys and much to the disappointment of the sizeable crowd, NUVYBZ band was a no-show, citing issues with the boat.

Additionally, the final race was run in the dark and the cheering crowd was forced to cheer at shadows.

The summary of the races is as follows: