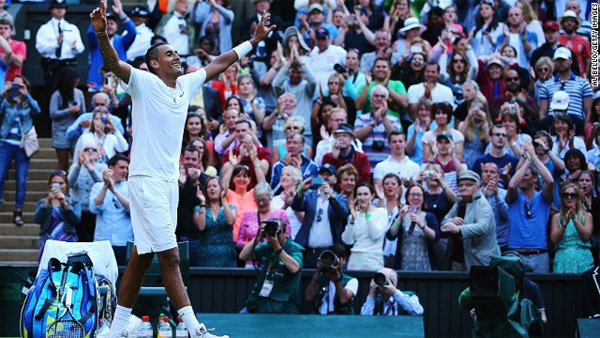 CNN) — To the list of names that contains Lukas Rosol and Steve Darcis, Nick Kyrgios can be added.

The Australian teenager is the latest unheralded player to force Rafael Nadal out of Wimbledon before the quarterfinals have even landed.

Nadal may be a two-time champion at Wimbledon but his reputation on grass has taken a battering in recent years.

Vanquished by Rosol in the second round in 2012, it was the first time the Spaniard had failed to get into the third round since 2005.

The following year Belgium’s Darcis compounded his misery, knocking Nadal out in the first round for the first time ever.
Nadal survived Rosol on his way to the last 16 this time around but there was another giant killer waiting for him on the grass.

Wimbledon debutant Kyrgios did the unthinkable and knocked the world No. 1 and 14-time grand slam champion out in four sets.

“I think I was in a bit of a zone out there,” he told reporters after setting up a last-eight clash with Canadian eighth seed Milos Raonic, who beat Japan’s Kei Nishikori 4-6 6-1 7-6 6-3.

“I didn’t really notice the crowd. It hasn’t really sunk in at all,” Kyrgios added.

“I played some extraordinary tennis. I think you’ve got to believe you can win the match from the start.

“So many emotions, I sort of didn’t know what to do, drop to the ground, throw my racket!”