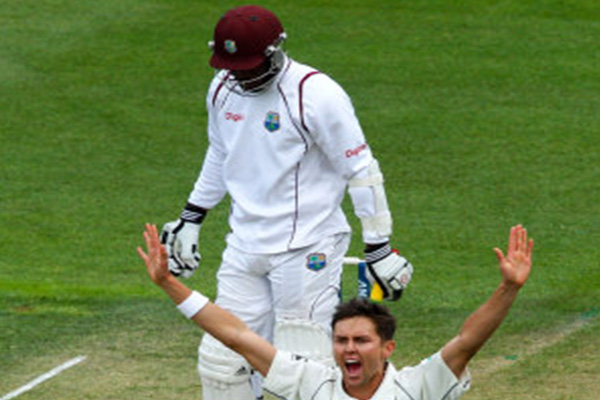 Wimpy Windies does under to New Zealand by an innings

The West indies team showed little resistance on day three of the second test match versus New Zealand and folded twice in the same day to gift the Black Caps  a comprehensive victory inside of three days.

Their main tormentor was the 24 year old Trent Boult who consistently struck like a bolt of lightning and eventually collected a man of the match ten wicket haul as he troubled the West Indians with his pace and disconcerting bounce.

West Indies resumed on day three on 158 for 4 and would have been hoping for an extended stay at the crease by the overnight batsmen, Marlon Samuels and Narsingh Deonarine but that was not to be.

Both were soon removed by Boult who then in short order removed Sammy, Shillingford and Best, all bowled for ducks.

West Indies dismissed in their first innings for just 193.

Brendon Mc Cullum promptly sent them back in again.

Another steady start by openers Powell and Edwards promised much but once Powell was bowled for a top score of 36 by Southee,, the procession back to the pavilion resumed.

Boult again leading their demise with a four wicket haul and Southee, equally difficult to cope with, collected three.

New Zealand won by an innings and 73 runs