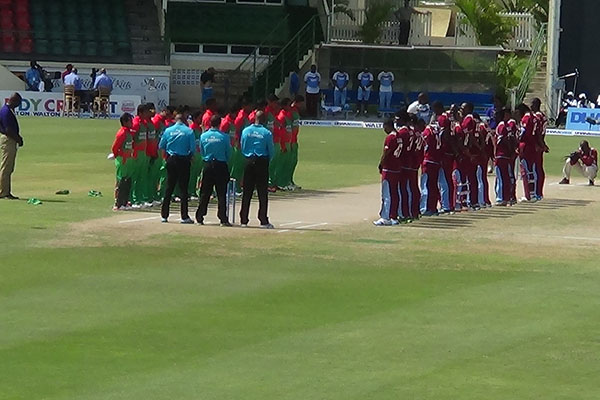 In front of a crowd that increased as the evening progressed, the Windies men took total charge of the match after a shaky start.

His decision seemed to have backfired as in the early stages, the home team soon found itself in deep mire at 12 for 2 with Chris Gayle and Lendl Simmons back in the hut.

However, Trinidadians Denesh Ramdin and Darren Bravo teamed up in a record breaking third wicket partnership of 258 runs which turned the game the Windies way.

Their stand was the highest for any wicket in ODIs for the West Indies and beat Hashim Amla and AB de Villiers’ 238-run stand.

Bravo was badly misstumped early in his innings but he and Ramdin took charge of proceedings with innings that were punctuated with the hitting of some huge maximums.

The Windies lost more wickets as the overs ran out as they tried to hit out.

The Bangladeshi team also started poorly when they found themselves on 2 runs for 2 wickets, with Kemar Roach taking a superlative catch at short midwicket.

However, Iqbal and Rahim teamed up in an enterprising partnership of  99 runs but as soon as they were separated, it was obvious which team would take the gold.

Ravi Rampaul was the stand out bowler with his 4 for 29 but the ultimate star of the day was Denesh Ramdin with his 169.

His score equaled Brian Lara for the third-highest individual innings by a West Indian in one-dayers.

Only Sir Viv Richards has higher individual scores — 189 not out against England in Manchester in 1984 and 181 against Sri Lanka at the 1987 World Cup in Karachi.

Earlier in the day, the youthful cricketers from the Kiddies cricket program on both St. Kitts and Nevis, turned up in their numbers to cheer on their heroes and had the opportunities for autographs. They even cheered on the Windies players as they entertained them in a small goals Football match.