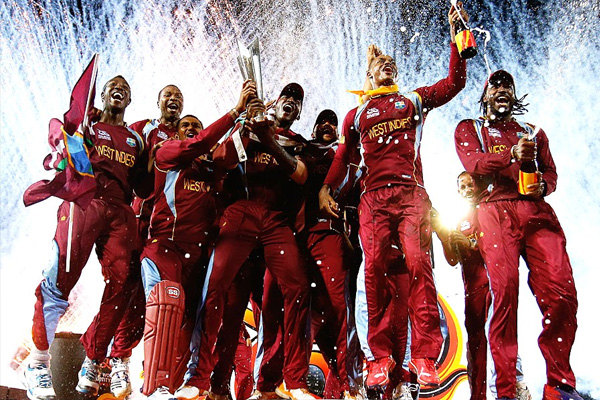 Windies to start WT20 against India

The West Indies’ men will defend the title they won last year in Colombo while Australia’s women will aim to complete a hat-trick of titles after having won the previous two finals in Barbados and Colombo.

The format for the men’s event in next year’s tournament has been changed following an increase in teams from 12 to 16.

As the teams’ seeding are based on the Reliance ICC T20I Team Rankings as on 8 October 2012, the top eight sides following the conclusion of the ICC World Twenty20 Sri Lanka 2012 will play directly in the Super 10 stage, while Bangladesh and Zimbabwe, which finished outside the top eight, will participate in the first round that will be held from 16-21 March.

The first round of the men’s event will include eight sides that will be divided into two groups of four teams each, with the table-toppers progressing to the Super 10 stage.

In the first round, Group A will feature host Bangladesh alongside three teams that will qualify from the ICC World Twenty20 Qualifier UAE 2013, to be staged from 15 to 30 November. Group B will include Zimbabwe, which will be joined by another three teams from the upcoming qualifiers. As such, the two groups will be finalised on 30 November.

The Super 10 stage will start with an evening match between former champions India and Pakistan in Dhaka on Friday 21 March.

The two groups of the Super 10 stage are:

Reigning champion the West Indies will launch its title defence against India in an evening match on Sunday 23 March. Earlier on the same day, Pakistan will lock horns with Australia, which is looking for the only global title that has eluded it to date.

If Bangladesh reaches the Super 10 stage, it will play all its matches in Dhaka, facing the West Indies on 25 March, India on 28 March, Pakistan on 30 March and Australia on 1 April.

The prize money for the men’s event will be US$3 million, with the winner receiving US$1.1 million and the losing finalist collecting US$550,000.

The ICC Women’s World Twenty20 2014 has been increased from eight to 10 teams after a recent ICC Board decision. The first round matches of the women’s event will take place in Sylhet from 23 March to 2 April, with the top two sides from each Group progressing to the semi-finals.

The 10 sides have been divided into two Groups, which are:

Defending champion Australia will kick-off its campaign on Sunday 23 March when it will take on New Zealand.

This game will be followed by the match between South Africa and Pakistan, which, along with Sri Lanka, qualified for the Bangladesh event after having reached the final of the qualifying tournament held in Dublin in August.

Host Bangladesh will make its maiden appearance on the world stage on 26 March when it will play last year’s semi-finalist, West Indies. 2009 champion England will start its campaign on 24 March against the West Indies.

ICC General Manager – Commercial, Campbell Jamieson, who attended the fixtures and ticket sales launch ceremony in Dhaka on Sunday, said: “The ICC World Twenty20 is the pinnacle of Twenty20 International cricket as it brings together the world’s best cricketers in a short and sharp nation versus nation tournament.

“The successes of the previous editions in South Africa, England, the West Indies and Sri Lanka have proven the popularity of this tournament, and it is exciting that this event will now be staged in a country like Bangladesh which has a very proud cricketing tradition.

“Bangladesh hosted the ICC Champions Trophy in 1998 (then known as the ICC Knock-Out) and most recently the ICC Cricket World Cup 2011, along with India and Sri Lanka. Following the legacies of these two successful events, as well as the ICC U19 Cricket World Cup 2004, I’m confident that Bangladesh will once again produce a world-class tournament.

“As regards to tickets, these will go on sale from 10 November and both the ICC and the BCB have ensured the prices are affordable and maximum tickets are available to the general public.”

Bangladesh Cricket Board (BCB) President Nazmul Hassan said: “We are a cricket-crazy nation. The game of cricket is probably one of the strongest unifying factors in this country. Through cricket we showcase our passion, spread our message of harmony and welcome everyone with open arms to our land.

“With the launch of ticket sales and unveiling of the schedule we are inviting the people in Bangladesh and all around the globe to visit our stadiums, support their teams and to feel the spectacular mix of colours Dhaka, Sylhet and Chittagong offer. After all the action and the fanfare had subsided I hope you will have a lasting memory of this country and its hospitality.”

Sale of tickets and international tour and travel packages

Tickets will go on sale from 10 November and will be available via the ICC website and at nearly 100 official ticket sales counters located in MoneyGram outlets in specific branches of NCC and Agrani banks situated throughout Bangladesh.

The ICC and the BCB have appointed Book my Show to manage the ticket sales process. The sales policy will ensure equitable access to purchase tickets for local and overseas fans alike.