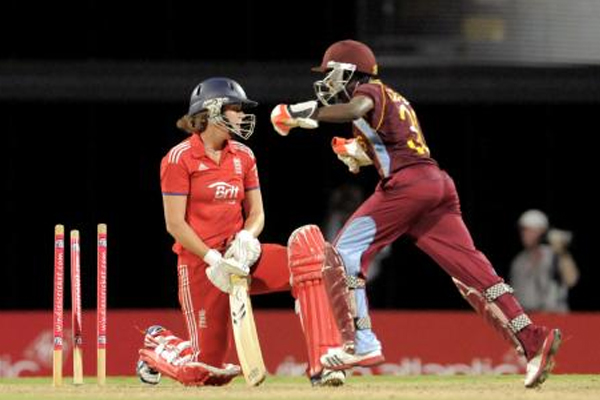 Windies win in Super Over

Bridgetown, Barbados – West Indies defeated England in a super over after scores were tied in the final preliminary match of the Women’s T20 International Tri-Series at Kensington Oval, on Thursday night.

Deandra Dottin blasted two fours in consecutive balls as West Indies scored nine without loss after England posted six for one wicket in the super over as a result of both teams scoring 118 for 7 in a thrilling precursor to Saturday’s final.

The match swung back and forth and transformed into a tense and nerve racking tussle as West Indies recovered from a poor start and England, who also faltered, crawled back into the game and well within sight of victory.

Stand-in captain Stafanie Taylor, the player of the match who top scored with 40, was also the leading wicket taker with three scalps, including two in consecutive balls, to extend the early damage already done by Anisa Mohammed.

Mohammed removed Laura Winfield for 18 in her second ball and had Sarah Taylor caught behind by substitute wicket keeper Shemaine Campbelle who performed brilliantly behind the stumps.

Lydia Greenway top scored for England with 36, a crucial innings which kept the visitors in the game and eventually helped to force the super over.

A poor over by Deandra Dottin which allowed 11 runs, did not help West Indies but gave England the upper hand as their target became 19 from 18 balls.

The tension prevailed at Kensington Oval as Shaquana Quintyne bowled a tight penultimate over that cost six runs leaving England to chase 9 to win from the last six balls.

With four required off the final delivery, the batters scrambled through for three runs after Danielle Hazell edged to third man to even the scores.

Dottin delighted the appreciative crowd by hitting two fours from her first two balls of the super over and with a no ball, secured victory for her side, replying to England’s six for one.

West Indies scored slowly and were restricted by the England bowlers after winning the toss and opting to bat first.

They also lost early wickets and plunged from 15 for one in the 5th over to 65 for three after 15 overs.

However a quick-fire partnership for the third wicket between stand-in captain Taylor and crowd favourite Deandra Dottin produced 34 runs and helped the West Indies to build their total.

They lifted the Caribbean side from 65 for three to 99 for four as the England bowlers maintained a tight line and length.

Taylor batted responsibly to post the top score of 40 before she was caught by stand-in captain Jenny Gunn, who she had dropped her twice.

The Home side continued their come-back with Dottin attacking the bowling and smashing two towering sixes.

However after scoring 26 runs in 12 balls she was caught at deep cover attempting another big hit.

West Indies resumed their fight in the final overs, helped by some late big hitting from Campbelle who scored 12 not out off 6 balls.

Gunn led the attack for the visitors with two wickets for 11 runs.

West Indies and England have already qualified and will meet in the finals of the tri-nation series on Saturday.

Jenny Gunn 2 for 12; Colvin, cross and Langston 1 wicket each

Super over: England 6 runs for 1 wicket