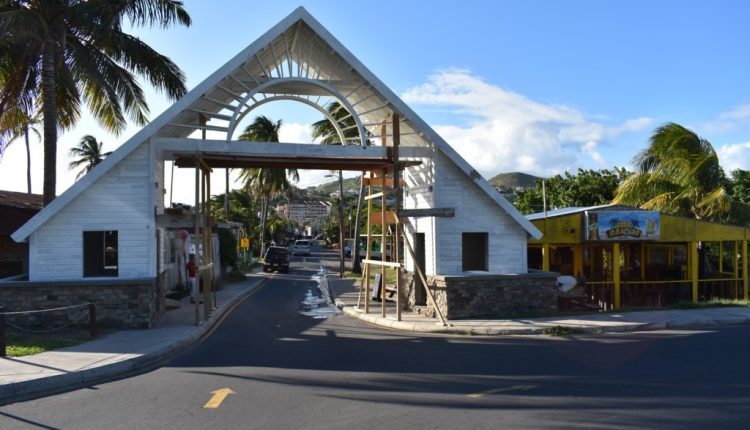 Basseterre, St. Kitts, January 16, 2020 (SKNIS): The joint effort between the Government of National Unity and the CARICOM Development Fund (CDF) has seen the steady refurbishment of the popular area at South Frigate Bay known as “De Strip”.

Minister of Tourism, the Honourable Lindsay Grant stated during the Prime Minister’s Press Conference on January 15, that work on the area has progressed at a steady pace as “the CDF is a stickler for process and procedure. Because of that, it has taken longer than anticipated for the funding sometimes to materialize.”

“As recently as in December of 2019, we have put in for the funds by CDF, their portion of funds, over the Phase One of the project, which will enable us again to ramp up the project,” said Minister Grant. “If you have driven over there recently you would realize that people are back to work on the project.”

Minister Grant stated that the project consists of two components, the landside and the seaside.

“Right now we are working on the landside, which involves the entrance area, the exit, and the bathrooms on the side to the pond.  We fixed up the road already,” said the minister.

The tourism minister stated that the entrepreneurs at “De Strip” appreciate the work that is being done and have “stepped up their game.”

“If you have gone over there recently you’ve seen new bars, refurbishment of bars [all] anticipating the kind of business that they will generate in the not too distant future,” he said.

Minister Grant said that a lot of work is also being done on the effluent at the site.

“That has been an issue over 20-30 years where the effluent has not been properly disposed of,” he said. “We are ensuring that in this environmentally friendly world that we are in that we make sure that we dispose of the effluent in a proper manner. And that is being done. You won’t see it physically from the top but we are going to connect into the Marriott system and that is taking us a significant amount of money. It’s going to take us over a million dollars to make sure that is done.”

In terms of the seaside, Minister Grant said that work will commence there shortly.

“We had some marine engineers in from Jamaica over the last eight months who would have done some surveys in terms of the waves and wind action in terms of the seaside,” said the Minister of Tourism.

The minister stated that Frigate Bay is losing some of its beach and the project will ensure that the beach is not lost altogether.

“So we have done that wind and wave action survey by the marine engineers over an eight month period,” he said. “We are now going to begin the work on the seaside in terms of putting in groins and breakwaters to ensure that the beach comes back and then we put in the boardwalk, which we intended to do.”

The Minister of Tourism stated that the Government of National Unity is committed to ensuring that the project finishes in 2020 and so far is on pace with the project.

St. Kitts-Nevis Continues to Maintain its Number One Status in the Region, Says PM…