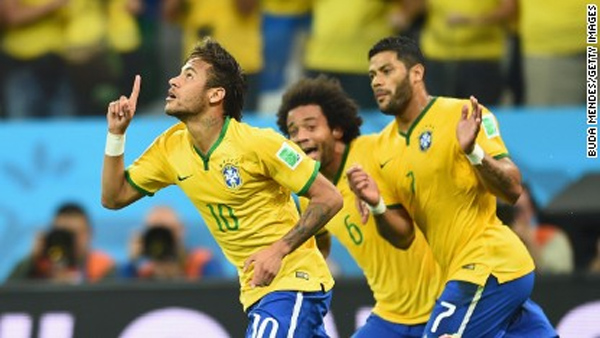 On a night where its players finally stepped into the high-pressure cauldron atmosphere of the World Cup on home soil, Brazil found a way to win.

Gone are the days of “Fútbol Arte” or “Joga Bonito” — the beautiful game — this current generation cannot compete with that of 1970 or 1982.

But it does possess its own heroes — and when Brazil needed him most, Neymar, for so long the face of this World Cup, stepped up and delivered.

Oscar’s stoppage-time strike ensured a party atmosphere in Sao Paulo — though it did not prevent protesters from assembling outside the stadium immediately after the contest.

In a week where politics has overshadowed sport, this was the result the entire country had hoped for and rounded off a day which had begun in worrying fashion.

Earlier Thursday, violence erupted in Sao Paulo as police clashed with protesters around 11 kilometers from the stadium.

Critics are furious with the Brazilian government for spending $11 billion on the World Cup instead of low-income housing, hospitals and schools.

Inside the arena, the country’s president Dilma Rousseff was booed by the crowd despite her attempt to keep a low profile.