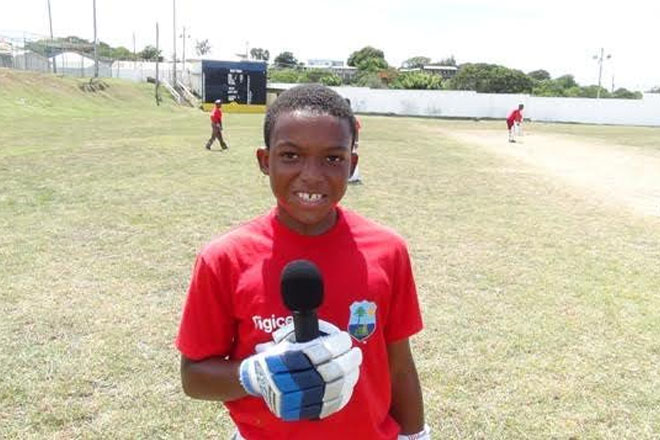 (Sports Page) — Having a close up look at him, he reminds one of his dad. There is a sense of timing and perfection in his stroke play. He watches the ball onto his bat and is very quick to put away anything loose.

Carlon Tuckett was among a group of young cricketers who willingly showed up at the ET Willet Park on Monday 5th October. A day when most of the other children were so happy to be off from school, as the teachers were having their professional day that the last place they would have been, would have been at the E Willet Park, playing cricket in sweltering heat.

But here was Carlon, among others, under the close watch of his dad, Carl Tuckett, the former West Indies allrounder, playing every ball on its merit and obviously distraught, whenever the slightest of errors were made.

In a brief interview after his knock, which he reluctantly forfeited, Carlon spoke about his recent tour to England with a group of youthful Barbadian cricketers and indicated that it was a great experience.

He noted that the ball moves around a lot more on the English pitches that he is accustomed to locally but was happy that he was able to play one of the standout innings on the tour. An innings of 51, which helped his team to win that particular game.

Asked about his future goals, Carlon was clear. He wants to do the complete run of the mill and play for all of the teams at the respective youth levels, going upwards and ultimately making it into the West Indies team.

What will he major in? Well the youngster bowls, bats and wicket keeps with equal enthusiasm and fervour.

‘Am going to be an allrounder. Am going to do all of them. Yes sir,’ he stated confidently.