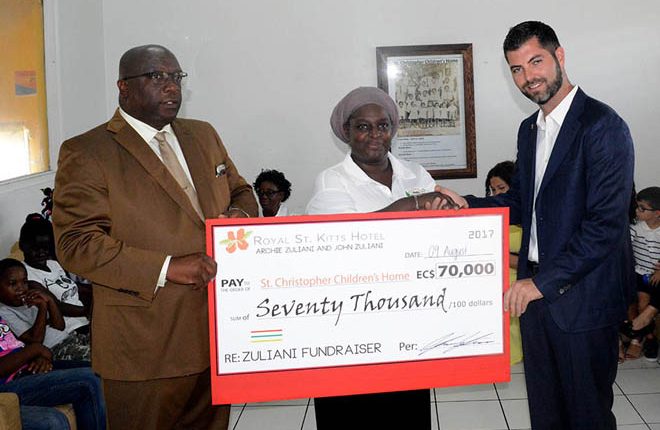 (Press Unit in the Office of the Prime Minister) – Mr. John Zuliani, son of the late Alceo “Archie” Zuliani, continued his family’s longstanding tradition of making charitable contributions to the St. Christopher Children’s Home today when he presented a cheque valued at EC$70 thousand to the management of the Home.

This donation is expected to significantly enhance the lives of the 14 children who presently reside at the St. Christopher Children’s Home.

The presentation, which took place at the Home located in Cardin Avenue in Basseterre, was witnessed by Prime Minister Dr. the Honourable Timothy Harris, Minister of State in the Ministry of Health, Community Development, Gender Affairs, and Social Services, the Honourable Wendy Phipps, and the management, staff and residents of the St. Christopher Children’s Home.

In his remarks, Mr. John Zuliani, who is the President of Trans-Americainvest (St. Kitts) Limited/Royal St. Kitts Hotel, said the funds were raised during an event that was held in Canada last month.

“We were able to do a fundraiser, which is generally known in the Italian community as a ‘stag’ for a new couple – for my fiancé and myself, we are getting married next year in February – and we decided to contribute all the funds raised from the stag to the Children’s Home in memory of my father. So in essence, it will be my father’s last contribution to the Children’s Home and our family’s continued commitment to supporting the Children’s Home here in St. Kitts,” Mr. Zuliani said.

Administrator of the St. Christopher Children’s Home, Margaret Stevens, used the occasion to express her profound gratitude to the Zuliani family for its continued support of the organization over the years.

“We are a non-government organization so we are very dependent upon contributions such as these,” Ms. Stevens said. “We have an annual run/walk, which this year is October 7th, which is our major fundraising event which enables us to keep the doors open, so a donation like this from the Zuliani family is a blessing and we hope that these blessings continue to flow.”

Prime Minister Harris, along with Ambassador His Excellency Michael Powell, attended the fundraising event at the invitation of John Zuliani.

During the presentation, Dr. Harris extended his own words of appreciation to the Zuliani family for its generosity and extended contribution to the St. Christopher Children’s Home.

“We see this as a mark of perhaps the genius of Mr. Zuliani, that of all the things that he could have contributed to, he chose the St. Christopher Children’s Home, he chose to invest in the future of St. Kitts and Nevis because that is what the children represent for St. Kitts and Nevis and all over the world. This is an effort to ensure that none of our children, no child, is in fact left behind and so the Government fully endorses this programme,” Prime Minister Harris added.

Apart from the monetary contributions, the Zuliani family’s longstanding support of the St. Christopher Children’s Home includes the provision of Christmas lunch and gifts on an annual basis.

During the 1990s, the late Archie Zuliani also impacted upon scores of students throughout St. Kitts who were the beneficiaries of a scholarship fund that covered their uniforms and textbooks from first form all the way through fifth form.